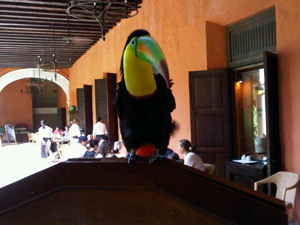 Matthieu the toucan is mascot of Sofitel Santa Clara.  Unlike the building that houses this luxury hotel in Cartagena, Colombia, no-one knows how old Matthieu is.  He lives in the lush garden – a Rousseau delight that includes 40-foot palms – that occupies most of the central courtyard of this divine former convent, opened 1621 for the Clarisa nuns, established by Doña Catalina de Cabrera in 1612.

The open courtyard and its surrounding cloister also offer cool places for morning coffee – the adjacent all-day restaurant, which you enter over a glass-topped mediaeval well, looks out over the 60-foot turquoise-blue pool. 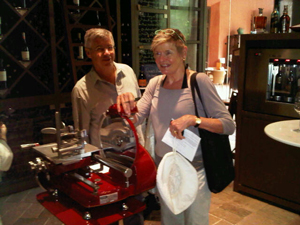 Nothing slices like a Berkel, as Richard Launay explains

The gal’s favourite rooms at this 122-room hotel, converted by its owners, led by local architect José Alvaro Arias of Arias, Serna & Saravia, are those on the top floor facing across the Old Town’s limestone walls and Avenida Santander to the Caribbean.

501, where I stayed last century (true, on February 20th, 1999) is being transformed into a mega suite, all of 2,500 sq ft, plus the same size private terrace with a hot tub and oh, that aforementioned view.

Also coming up is a Botero Suite, themed for Colombia’s most famous living artist, the Medellin-born sculptor Fernando Botero.  His daughter Lina Botero is doing the interiors. 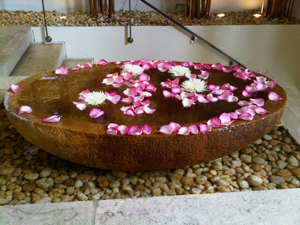 The sculptures around the hotel right now are also modern, but by other artists.  The ‘working sculpture’ in the recently-unveiled wine cellar of the hotel’s 1621 restaurant is not anonymous.

It is a Berkel slicer, the only one in Colombia.  It stands supreme, surrounded by glass-fronted cabinets holding over 250 different wines, and others containing French cheeses at exactly the right temperature, and whole black-pig Cerdo Negro hams from Spain. 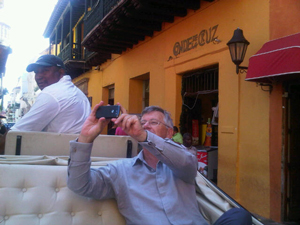 The hotel’s Brittany-born General Manager, Richard Launay, has recently arrived from Sofitel’s Old Cataract Hotel in Aswan (which I also visited last century). He, too, wanted a tour of Cartagena’s Old Town, so we installed guide Theresa, who learned her superb English at the George Washington school here in Cartagena, in one of the town’s famous horse-drawn carriages and off we set for local enlightenment.