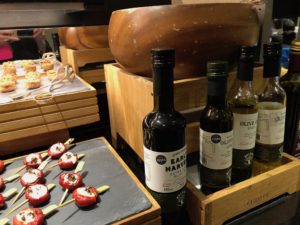 Array of olive oils at the club lounge’s cocktail hour

It was really good, says the gal, to catch up with global Frenchman Arnaud de Saint-Exupéry, whose profession, once he landed in the luxury hotel space, has taken him from Paris to London to Tokyo and now back to London. As Area VP UK and Ireland for Hyatt, he also heads one of the UK capital’s signature hotels, ‘The Churchill’, officially Hyatt Regency London – The Churchill.  Yes, there are memorabilia dotted around the 440-room property, but not too much of it, a bust here, a memento there. Among pieces in pop-up exhibition is this portrait, above, a 47 x 47cm oil by Paul Wright. The photo was taken as de Saint-Exupéry was on his way out, to co-host, with his wife, a dinner that Hyatt was sponsoring at the official residence of the French Ambassador in London. This was in aid of LP4Y, Life Projects For Youth, helping disadvantaged teenagers in south-east Asia. 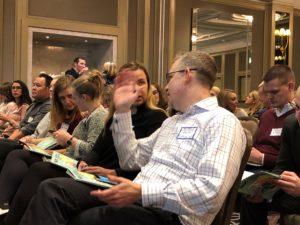 Hyatt, and Arnaud de Saint-Exupéry, will never say no to challenges. At corporate level, Hyatt has signed a global partnership with Skift for ten Megatrends presentations, in different destinations.  In London, interestingly, it was noticeable that at least 90% of participants were well under 30, and predominantly hospitality-related digital marketers and branding specialists who wanted authentic facts and stats. Skift’s CEO and Founder Rafat Ali presented some of the megatrends that his research department has identified, and his audience were given books to take away. Now in the past I have heard Rafat Ali brilliantly interacting with such greats as Keith Barr and Gerald Lawless. But this evening was different. Free, thanks to lead sponsor Hyatt, and such other supporters as Abu Dhabi Convention Bureau and Visit Dallas, it was held to launch a handy 72-page color book, Skift: Megatrends Defining Travel in 2019. Although the pre-presentation hospitality was confined to buttercup- or fuchsia-colored alcohol-free drinks, afterwards there was a jolly good stand-up party with Pommery’s Champagne Greno, Grand Prestige Brut, and a full bar, plus bowls of warming curry rice, samosas and one-bite canapés. 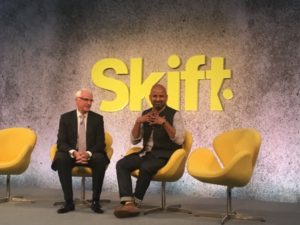 I must mention this luxury hotel’s main restaurants.  Years ago its adjacent, and somewhat symbiotic, Italian restaurant, by Giorgio Locatelli, was talk of the town (Madonna went there the first week).  It, like the hotel, is now a global institution.  There is also a Churchill Bar, with an outdoor cigar lounge, and, central to the whole operation, Montagu Kitchen has seen the lobby lounge of years past become a really sensible and enjoyable all-day dining place. The fact that this hotel has so much to offer, and that it is a mere five minutes’ walk north of Selfridge’s and the rest of Oxford Street’s retail, makes it popular with all ages – I travelled in elevators with a noticeable number of Millennials from the Middle East, wrapped up against the English winter.  Yes, we all like this place, said one. SEE ROOM 506, AND THE CLUB BREAKFAST