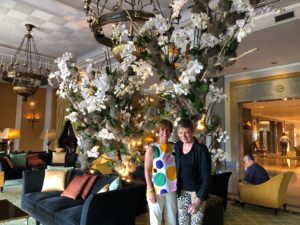 For those looking for a stylish weekend brunch in the Portuguese capital, Four Seasons The Ritz is the perfect solution.  This is a classic luxury hotel that knows you might want to sit outside, or inside in suitable baroque surroundings – the gal opted for outside on the terrace and, typically Four Seasons, the hostess suggested a table a little further along, just in case there were any aromas from the grill. This is an occasion to try fabulous sashimi, and ranges of sushi, made on the spot by a smiling Nepalese. It is also a jolly good time to try such local cheeses as an Azeitão sheep’s cheese, and a Serra Amanteigado cow’s cheese (both strong, said the server, who insisted in helping spoon out tastings). See the image, above. 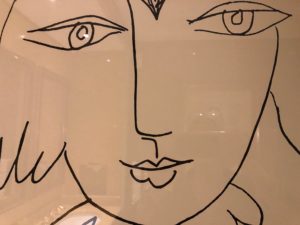 Face art, in the hotel…

Conceiçao Silva – call me Connie – has been with the hotel since 1995, when it was InterContinental. Three years after she arrived the owner, Sociedade de Investimentos Imobiliarios, switched management to Four Seasons, and her allegiance became instant. Four Seasons is family, she says, though she admits it is evolving with the market.  Male servers at brunch today are tie-less, as are male guests. Today’s customers want more wellness facilities, and the hotel is apparently about to put in an outdoor swimming pool.  Since the tragic and sudden death of Chairman Pedro Queiroz Pereira a couple of weeks ago, presumably his three daughters, Mafalda, Lua and Filipa, will now be the decision-makers. 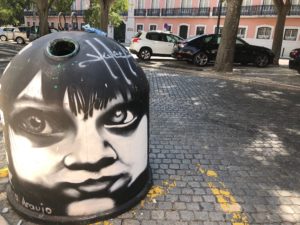 .. and outside the hotel

But luxury, says Connie, still remains the small details.  Here, at this glorious hotel, built 1959 and still an art gallery of a building, everything is meticulously spic and span. The flowers are carefully replenished every Monday. The art works include a wall-hung sculpture that is a reminder that Lisbon, like Rome, is built on seven hills.  I see an outline face that reminds of a similar work at MGM’s The Mansion in Las Vegas.  Later, on my way up the hill, I see another face, street art. Lisbon offers a myriad of memories, and evokes non-stop smiles. NOW SEE A VIDEO OF THAT OUTSTANDING BRUNCH