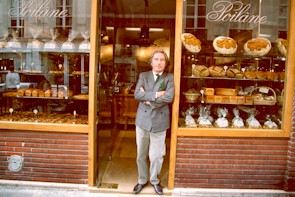 A bread-loving gal thinks of Lionel Poilâne continually – like every time she has decent bread.  It was he who gave his name to the crème de la crème of breads.

‘Poilâne’ is used just like that (like apple, biro, hoover and Kleenex).  There is a Max Poilâne, who has several bake shops, but it is his late brother, Lionel, who will remain forever luxury king-of-the-crust.

I remember going to the party he gave to commemorate the birth of the sandwich, attributed erroneously to John Montagu, the 4th Earl of Sandwich, who asked his valet to shove meat between a couple of slices of bread. 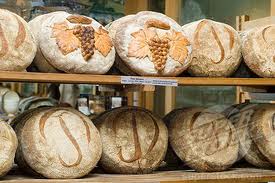 A display of Poilâne loaves

Lionel hosted the party at the circular bakery he built outside Paris. It was designed by his wife, the beautiful Ibu (Irena) who – he told me several times – he met when he knocked at the wrong door in a New York apartment block.  Ibu, who was, I think, a Polish princess, so attracted love at first sight that he said immediately, will you marry me?

Two daughters later, Ibu designed this amazing bakery, circular, with a gigantic open space in the middle for storing wood and, around it in a nearly-closed circle, 12 double furnaces, fueled by that wood. On the outside of the furnace-circle, 24 bakers toiled, producing the marvelous Poilâne bread. 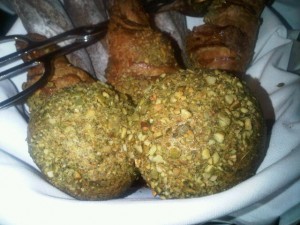 Think wholewheat flour and sourdough miches, big round loaves, airfreighted to restaurants and individual gourmets around the world. Every big name from Alain Ducasse to Marcus Wareing (at The Berkeley Hotel, London) is a Poilâne follower – Lionel even baked an entire miniature bedroom suite, all made of bread, for surrealist painter Salvador Dali.

Back at his Paris office on rue du Cherche-Midi in the Saint-Germain-des-Prés area, a couple of blocks from Hotel Lutetia, he would hold court at breakfast time.  He would butter a slice of untoasted Poilâne bread, and dunk it, just like that, in milky coffee in a semi-circular cup about six inches across. 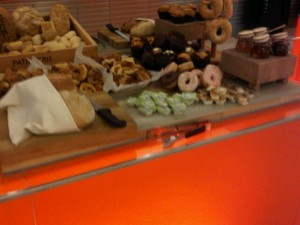 The brothers inherited their bread-making skills from their father Pierre, who started a bakery in 1932.  Lionel was going to continue expanding his empire… but, tragically, the eight-seat Augusta 109 he was piloting – he was President of the French helicopter association – crashed into the Atlantic on 31 October 2002 as he, Ibu and their dog were flying to Ile de Rimains, the private island he owned off Brittany.

Their daughter Apollonia, with a Harvard degree under her belt, now runs the empire.  It employs 130, produces 15,000 loaves a day and has annual turnover of euro 10.7m.  As Lionel used to say, ‘Bread is the soul of civilisation.” 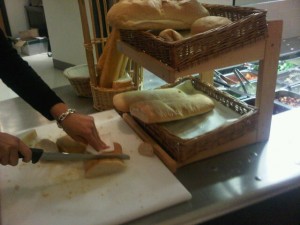 Carve your own breads, The Canteen, staff restaurant at Mandarin Oriental, London

A gal, frankly, expects great BREAD as she travels around – and she means bread, not sweet pastries and croissants, proper bread.  See the basket of bread rolls on the buffet at Club InterContinental at InterContinental Hong Kong, which was accompanied by carve-your-own breads and fabulous butters.

See the extensive selection back in at London’s Heathrow Airport, in British Airways’ premium Arrivals lounge for those who have flown in longhaul and want an Elemis shower and a great breakfast.  What is also impressive is when employees also have great breads – see the selection being carved in The Canteen at Mandarin Oriental London. 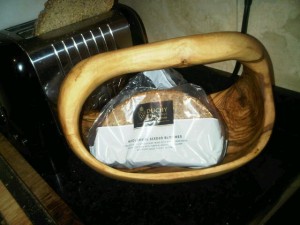 Back home, some of the ingredients for a great breakfast

And, finally back home, a gal loves her own breakfast bread, home-baked by Her Man and, for a treat, supplemented by the heavily-seeded Duchy Original wholewheat seeded bloomer (no, not personally baked by Prince Charles, whose Prince of Wales charity runs Duchy Original).

Toast it in my favourite Dualit machine, serve it in an olive-wood basket from Orvieto, eat with Rachel’s organic unsalted butter – yum yum. But I do not dunk it in coffee. A gal cannot emulate the one and only Lionel Poilâne.