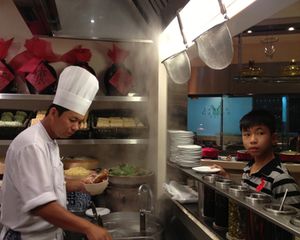 Feeding everyone, in Lemon Garden

If there were a prize for Feeding The World in luxury hotels, Shangri-La Hotel Kuala Lumpur would at least be in the short list with a good chance of winning.  The gal checked out its amazing first (upper) floor Horizon Club, which seems to accommodate those staying in at least a quarter of the hotel’s 701 rooms and suites.  She fortunately got there shortly after its 6.30 am opening when she had the breakfast to herself. The buffet was exquisite, and ready to feed everyone from Japanese wanting miso soup through to our American friends wanting pre-made lox and bagel sandwiches. The main global gourmet experience, however, is downstairs in Lemon Grass. 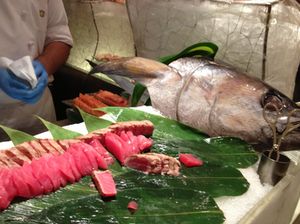 Sashimi, and a fish head

This is just an incredible restaurant, now at least a decade old and going stronger than ever.  It was designed by Adam Tihany who had the then-brilliant idea of storing plates on shelves below the food displays – this has of course since been copied by all and sundry.  It saves space on valuable food-display area and is much more hygienic.  At Lemon Grass the dinner stations include Chinese, Indian, Italian, Japanese, Malay and international.  Thursday nights highlight seafood and oh the displays of oysters on ice – servers are almost running as they rush in more supplies.  Malaysian men in their 20s (in their off-duty uniform of polo shirt and floppy shorts) walk back to their tables with plates piled Everest-high with crab and lobster bits, and those oysters. 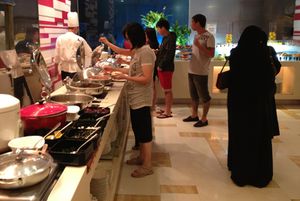 Diners come from many lands…

Kuala Lumpur is indeed a melting pot.  A legacy of the Arab Spring back home, there are more than the usual number of Middle Eastern visitors right now, although they have always favoured this country – some as a holiday home for their falcons, lucky birds.  There is certainly something for everyone, even the French.  Are you addicted to croissants?  Here they serve not only really gorgeously light and fluffy normal butter croissants but also wholewheat and spinach varieties.  In a further ploy to make our Parisian friends feel good, the preserves are Bonne Maman, one of the most recognisable French brands to international travellers (although Peugeot with those salt and pepper mills is catching up fast). 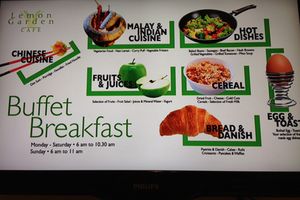 And that brings us to breakfast. Shangri-La very thoughtfully, and generously, has a free coffee-to-go station in its front lobby, make it yourself and it is really good. Right by it is the breakfast sign that tells you exactly what type of breakfasts it specialises in.  Checking out Lemon Grass’ breakfast stations, I swear some of the same items appear from last night, like a range of smoked salmon, and little cakes and muffins.  Come to think of it, of course, oysters, with a glass of champagne, can go very well with the start of the day but I suspect there were no oysters left after last night’s jamboree.  Girlahead travel tip: to get the most out of any breakfast buffet experience, get there early… 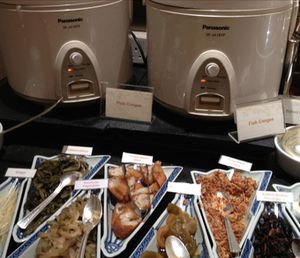 Anyone not there early might not have found the metal-topped glass jars filled with mango purée-topped absolutely gorgeous home-made Greek-style yoghurt.  Someone should market that stuff, it would knock the world’s current top-rated yoghurt into the shade (for the record, tripadvisor addicts say Fraiche Yogurt in Palo Alto has about the best yogurt, sic, anywhere but, as if in opposition, Mireille Guiliano, author of “French Women Don’t Get Fat, advises steering clear of ‘the host of undesirable ingredients you find in the American versions’ of yoghurt and, as girlahead.com followers know, I agree).  Anyway, here, for the Chinese there are plain congees, and fish congees… 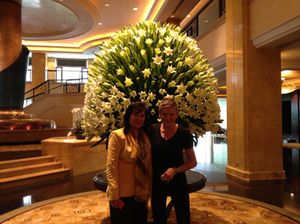 I meet up with my good friend Dato’ Rosemarie Wee, who has headed the awareness of this luxury hotel since, well, the last century, although she looks so 21st century.  She was appointed a Dato’ this January, to honour her continuing charity efforts. She had three week’s notice, just time to get the ceremonial gown required, and she has to attend all State functions.  There are under a hundred female Dato’s in the country, but many more male Dato’s. Their wives become Datuks, incidentally, but Dato’ Rosemarie’s husband gets – nothing. Is the world unfair?