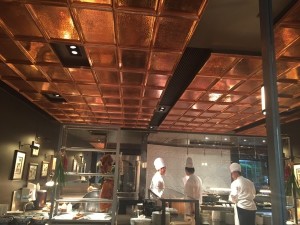 The former adjacent kitchen is now part of the buffet

It takes a determined operator and an owner who is prepared to invest to close a luxury hotel’s already successful all-day restaurant and, six months later, re-open it with a completely new look. That is what has happened at Ritz-Carlton Millenia Singapore. The combination of GM Peter Mainguy, owners Pontiac Land and designer Tony Chi has completely revolutionised what is now the 260-seat Colony. It offers food for today in an ambience that recalls trading routes of the past, from UK through to the Far East.  The former adjacent kitchen has been opened up to become, as shown in this image, part of the overall buffet. Lots of mirrored wall panels and overhead copper tiles make this area an imaginative grotto, says the gal. 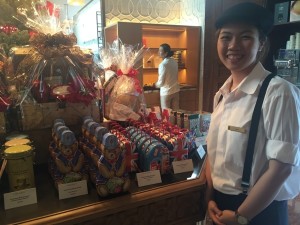 At the far end of the overall space another adjoining room has been opened up to become food and drink retail. Servers here wear flat black caps, baker’s-boy style, and white shirts and black trousers with braces, or suspenders. Buy your Christmas hamper here, and a range of edible goodies and chocolates and, of course, macaroons. I wonder, by the way, if there are any food stores anywhere that do NOT sell macaroons these days? Hotel retail that springs to mind would also include the brilliantly-lit macaroon vitrine in the main lobby of Ritz-Carlton Kyoto, where I stayed during this year’s ILTM Japan: next year, ILTM Japan moves to Tokyo, to Conrad Tokyo, and I will not be back in Kyoto. Back to Singapore – sadly impossible to buy anything in this attractive shop as I am about to get onboard a ship. 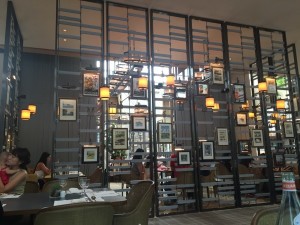 The whole area of Colony has been sub-divided by open screens that rise right up to the ceiling, which looks like mother-of-pearl but is in fact chromafusion glass. The ceiling, and Dale Chihuly‘s Sunset, a green-burst glass sculpture high up on the end wall, are the only items remaining from the space’s former existence. These open screens are haphazardly decorated with old posters and sepia photos of yesteryear. Some of the ties holding the wood slats together are real old-fashioned electric cords, the kind you used to see in your grandmother’s house. Cleverly, the central third of the length of Colony can be made into a compact inner sanctum, say for afternoon tea, by pulling across ceiling-high mirrored panels that are otherwise hidden from general view. 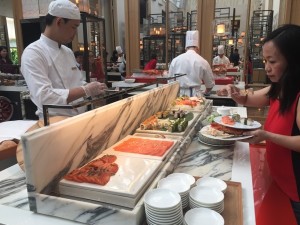 I have already mentioned that the former production kitchen is now a big buffet area. Before, the fixed buffet was in the centre of the room. Now, as well as the stations in that former kitchen, there are fixed stations around the periphery of the main area, to give a total of eight food stations in all (having them around the edge has turned this eating concept inside out and it is absolutely successful, as shown by number of diners going up by about 40%, and their average spend by about 15%). Of course one of my favourite areas has to be the seafood buffet, and I eat more than enough delicious salmon and tuna sashimi, with freshest wasabi. I long to come back for a Sunday buffet, with its freeflow Moet 2006 Reserve: the New Year’s Day buffet this Friday will have not only unlimited Moet, same vintage, but pay a bit more and you can drink as much Dom Pérignon 2006 as you like. Now THAT is a sign of a true luxury hotel!