‘The hills are alive to the Sound of Music’, sang Julie Andrews in the 1965 movie The Sound of Music. It appears that much of the world, including such luminaries as the Dubai-based President of Kerzner International (Atlantis and One&Only), are also SoM fans. Melinda Gates is such an SoM aficionado, indeed, that she and her entire family celebrated her last big birthday with a themed party at Schloss Leopoldskron, Salzburg, Austria, where much of it was shot. Yes, Bill Gates in lederhosen.

Schloss Leopoldskron takes such events in its strides. The bus loads taking all-day, everyday, four-hour Sound of Music tours, with everyone singing merrily the whole way, does not fortunately get into the Schloss’ gated grounds.  But a few weeks ago Schloss guests, for this is indeed a luxury hotel, included half a dozen nuns, who were later seen jollying it up in the bar. They were not nuns, merely dressed for the SoM visit. And, also, a request came through from someone who wanted to propose to his girlfriend at the Schloss’ lakeside stone gate supporters where Julie Andrews sang a lot. No problem. The suitor arrived, leading a blindfolded woman. He removed the blindfold, went down on his knee, a Von Trapp descendent sang an appropriate song and the new fiancée swooned, disorientated. She had been blindfolded all the way from Vienna, three hours’ drive away..  (Interestingly, the Von Trapp family does have its own hotel, in Stowe VT – see Monocle March 2020, page 57). 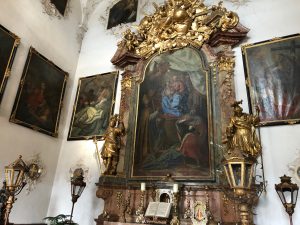 This is a most unusual, and in many ways unique, 69-room luxury hotel. On an eight-ha estate, the main three-floor mansion was built in 1736 by Prince-Archbishop Leopold Anton Eleutherius Reichsfreiherr von Firmian following drawings made by a Benedictine monk, Bernhard Stuart – see a corner of The Venetian Room, above. It has a working chapel. Its most recent history begins when it was bought in 1918 by actor-producer Max Reinhardt, founder of the world-famous Salzburg Festival, celebrating its centenary this year. He used Schloss Leopoldskron as a creative stage, dotting the grounds with trees, statues and real cranes, herons and pelicans, and putting on impromptu performances with such friends as Richard Strauss.

After WWII – yes, I have jumped several decades, for brevity – the estate passed to The Salzburg Global Seminar, an absolutely admirable world peace initiative started by three Harvard students. Today the Seminar, headed by Stephen Salyer, former head of PBS media in the USA, is a not-for-profit organisation holding continual sessions here, onsite, as well as, non-stop, having working parties out in the field, worldwide.  From the hotel guests’ viewpoint, however, staying here is just like any other top-class property, with notable differences.

I was in #523, the Max Reinhardt Suite, his own personal rooms on the second floor of the main schloss. I loved the stuccoed walls and high ceilings, and views over the grounds and lake. The sitting room had a tall centuries-old tiled stove and a, working, circular-dial Bakelite phone. The shower was powerful, and I had organic toiletries, and a Dyson hairdryer. There was also a circular staircase leading down 36 stone steps to a secret door to the main library below, built 1920 in mediaeval style, a cornucopia of over 15,000 books, chosen by Max Reinhardt.  As well as the elaborate Schloss rooms, there is also more basic accommodation, probably 3.5-star, in the Meierhof block: this also houses a perfectly-satisfactory Lifefitness gym and an all-day Meierhof Café.

You can also order drinks in the Schloss’ main reception room – we were sitting, pre-dinner, enjoying local wines in front of a blazing real-log fire when three dirndl-dressed young ladies arrived to sing ‘The hills are alive..’.  There is no restaurant, but there are many good restaurants around: we had memorable lake fish and great steaks at Weiherwirt bistro, ten minutes’ walk away. 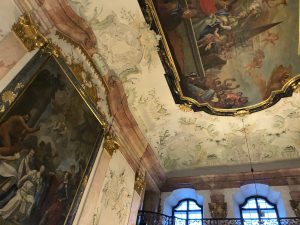 Look up at this ceiling, at breakfast

Breakfast in the Marbled Hall, is included in the room rate. Apparently, when Karl Lagerfeld saw the Marbled Hall he was so entranced that Chanel did a complete buy-out for its 2014 show – Lagerfeld and his cat, Choupette, slept in ‘my’ suite. As I helped myself to a generous breakfast spread, with eggs brought to order, I imagined his models strutting around, showing latest fashions in this high-ceilinged theatre with its centuries’ old walls, and ceiling, of elaborate gold-framed cartouches of imagined life in those times (think Sistine, without the religion).

So, take a run or walk around the lake, 2.2 kms total, or try billiards, or minigolf, or just read in that library. Despite the culture-heavy and stress-free ambience of this seemingly-rural Schloss, you are only ten minutes’ drive from Salzburg’s Old Town, with Mozart’s home, and fascinating pedestrian-only side alleys full of good-quality boutiques and little cafés (borrow one of the Schloss’ white bikes to avoid parking challenges).

One night, frankly, was not enough. Master of Schloss Leopoldskron Daniel Szelényi, whose title is actually VP Hospitality, Salzburg Global Seminar, says one family flies in, from Cyprus, year after year for Christmas and New Year. He has year-round occupancy of 68%, average stay 2.2 nights, and obviously during the Salzburg Festival he is booked out, way ahead.  This year’s centenary Festival runs 18 July through August and the fascinating programme includes Mozart’s Don Giovanni, Shakespeare’s Richard III and, the Festival special, Jedermann by Hugo von Hofmannsthal.