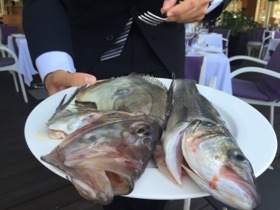 Just caught (but 20 minutes later, on our plates)

They eat a lot of fish in Malta, for obvious reason – it is an island, and the fisherfolk are out a-plenty. The gal called by for lunch at one of the St George’s Bay luxury hotels, InterContinental Malta, and it was such a heavenly day that it was decided to lunch not in one of the 481-room hotel’s inside restaurants but in, or rather on, Paranga, a stylish wood space on stilts above the sand. The manager presented what had just been caught, a John Dory and a seabass. The former subsequently appeared filleted, rolled around olives and cooked. The seabass was brilliantly skinned and filleted tableside, with a spoon and knife. Now that is true skill. 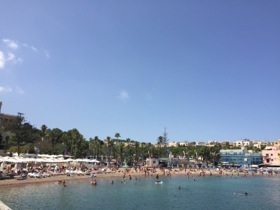 Looking back at the hotel’s beach

Louise Pullicino, who has recently returned to her homeland, and I looked back at the crowds on the hotel’s beach. Who would stay inside on a day like this, even if you have the glory of what will be, when the current renovations are finished, a 481-room beauty? The 19-floor structure is somewhat ziggurat-shaped, with balconies that make the whole thing look like a giant cruise ship. Right now they are finalising 30 new Highline Suites, smallest size 950 sq ft, which all share a rooftop infinity pool. The Swedes will especially like that, when it is winter back home up north – there are over 400 Swedes living in Malta permanently, many working for Betsson online gaming, and not surprisingly their familes and friends love to come and visit, especially in winter. 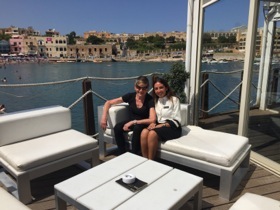 We ate in the open-sided restaurant and looked back at the beach, and across the water to St George’s, and then we lounged on Paranga’s terrace, which does indeed turn into a Bed Supper Club-like lounging area on Friday nights, but then every night the restaurant spills out on to the beach. And then I went up back up to the hotel’s outstanding 15th floor Executive Club lounge (think InterCon‘s club lounges in London, Budapest, Hong Kong and Sydney) and walked along to my just-finished suite, 1504. Designer is Auntielucy, a local supply company that uses Bang & Olufsen and Minotti as a matter of course, and has an endless supply of granite-grey paint. And the suite works. Everything was in exactly the place I would hope it would be – and, a big plus, I had lots of perfectly ripe whole fruits. 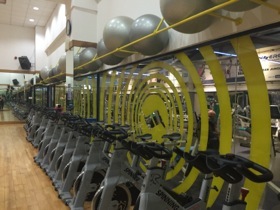 Spinning bikes to eternity, it seems

Louise Pullicino says in Malta the government pays you to go to university rather than the other way round (she studied the history and science of space and bemoans the rash of building on Malta). There is plenty of space at the hotel. Its owners, the De Cesare brothers, have turned their former Eden Leisure ice skating rink, attached to the hotel, into the country’s largest event space, 1,700 theatre-style with no problem, plus 24 breakout rooms. This is a very clever luxury hotel: it is also conjoined to a LA Fitness-style fitness complex (fresh orange segments as you go in). There are six permanent TRX ropes and a line-up of 26 spinning bikes must surely be a record ….. no wonder people stay an average 3.5 nights here, there is so much to do. My welcome pack, for instance, included details of two exclusive Malta Film Tours programmes featuring Game of Thrones inductions, Saturdays or Sundays, your choice, led by two actors. Wonder if they also throw in Midnight Express, the 1978 Alan Parker movie, starring John Hurt, which was actually filmed here in Malta rather than Turkey?