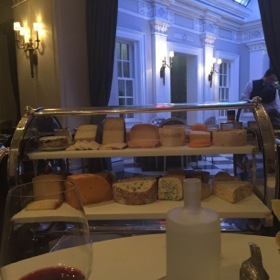 Sorry, said someone – the gal cannot remember who – we are running down supplies as Plume closes tomorrow for its short summer break (but look at the cheese trolley, if this is run-down time what does the trolley look like at full-up?). Plume is the Forbes Five Star restaurant that is the central point, literally, of The Jefferson Washington DC, a Preferred beauty at 16th and M Streets that feels like a large city townhouse. Perhaps this is because it is family-owned, by siblings Philip and Connie Milstein – her daughter, Abby, provides the A for their holding company, CAP Properties. Of course, with 96 rooms, it is a bit big for the usual townhouse, but there are definite elements of a stylish home. 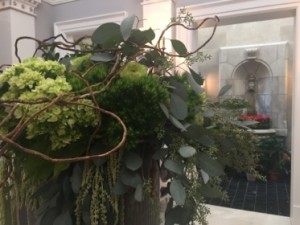 And some of the restaurant’s stunning flowers

Enter, and you look through an open wrought-iron terrace into a conservatory, marble floored like the walkway you now take, to the right and right again, past reception and a concierge seated at an antique table. There are flowers everywhere, as there are too in your room. Best number to have, by the way, is 803, the Thomas Jefferson Suite, with views south down 16th to The White House, and east across to the National Education Association building. You might well drown in Jefferson memorabilia here, with antique magnifiers and wall-hung engravings and such books as Thomas Jefferson’s Crème Brûlée (How a founding father and his slave James Hemings introduced French cuisine to America),Thomas Craughwell 2012; Passions: The Wines and Travels of Thomas Jefferson, James Gabler. Recover with a session on your private Matrix elliptical and a long soaking bath, in the freestanding tub, infused with the hotel’s Monticello Grove toiletries, by Red Flower. 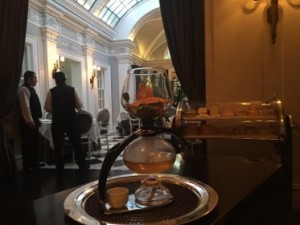 On your way to Plume you go past a dumb waiter holding a bottle of Krug. Yes, Jefferson invented the dumb waiter. Perhaps have a pre-prandial drink in Quill bar, a reminder, like the restaurant itself, of Jefferson‘s nonstop writings. At the table, choose your menu, perhaps pre-set six courses, with or without wine, or go for å la carte. The knowledgeable would definitely start with Chesapeake Bay blue crab tea. Remember those coffee makers where water, heated from below, rises into an upper container of coffee, and when the heat is removed the brewed coffee descends? This is the same. Put liquid in the lower glass jug, with a nightlight below. The liquid rises up to the crab in the upper jug. Remove nightlight and you have your tea (we had already had divine little gougères, with J. Lassalle Champagne, so we were not famished watching this, and then we were brought amuse of mushroom with truffle, beetroot with horseradish, and tuna with a spoon). 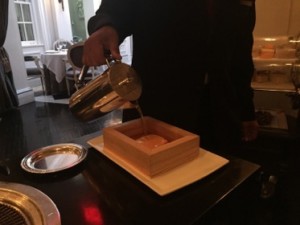 Beeswax is poured into the salmon’s ‘bath tub’

My main course was equally creative. Take King salmon and place in a miniature Japanese wooden bathtub. Pour in 200°(Fahrenheit) beeswax and let it set. Turn the whole caboosh upside down and, hey presto, you have moist-moist salmon. Drink the health of all your friends in a glass of Chehalem Pinot Noir 2008, as recommended and poured by sommelier Jennifer Knowles, and savour the whole experience. Most of the greengrocery produce, I hear, is brought by Amish, on a somewhat ad hoc basis – what they have rather than what you ordered – the heirloom tomatoes and Hass avocado that we have also tasted testify to the skills of the Amish farmers. I am with David Bueno, a Spaniard from near Seville who wanted to be a chef but he was too tall, even without a tall white toque. Later, when running restaurants here in Washington DC he met Philip Wood, boss of The Jefferson, and said eventually he would like his job – and that is how David Bueno is now number two in this lovely luxury hotel.