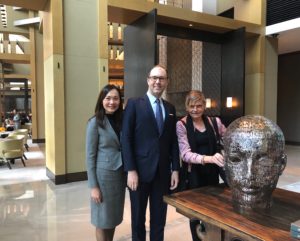 When a hotel gets its restaurants right, locals come – a thought that reminds the gal of Ian Schrager’s recent statement that a hotel should be for the people in the city as well as for visitors, and for this it helps to have a unique experience that touches people in some personal, emotional and visceral way.  Well, Country Kitchen at Rosewood Beijing really ticks all those boxes. It says fun, worthwhile fun.  The luxury hotel’s Manager, Robert Sexton, a would-be lawyer from Virginia, and his colleague Lili Wong, who heads sales and marketing, were not surprisingly determined to show off Country Kitchen. 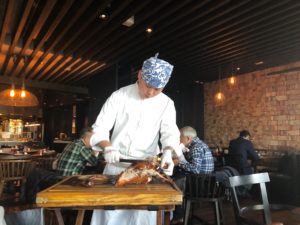 Designed by Stuart Robinson of BAR Studio in Melbourne, the space is light and airy, with lots of greenery. It has some plain-brick walls, and a big open cooking area dominated by a wood oven, with what seems like a year’s supply of logs in front. There are 40 days old ducks displayed au naturel, so to speak – see them, above – and nearby is a warming cabinet where their colleagues hang, post-cooking and pre-serving.  Lili Wong had thoughtfully ordered a duck beforehand: Country Kitchen gets through at least 40  and sometimes 50 birds, every day of the week. 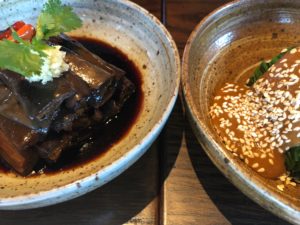 The carving specialist, recognisable by the patterned bandana he wears round his head, moves his butcher’s block table to waiting customers. He slices quickly, deftly, presenting china plates covered in overlapping slices of breast that are so exquisitely arranged they look computer-formed. Another specialist follows: using chopsticks, he slathers a paper-thin pancake in sweet sauce, adds julienne of spring onion and cucumber, and a bit of meat, wraps the whole as a pancake and turns one end over so that is resembles a parcel.  It was tempting to eat and eat, downed only with water from bronze cups.  Fortunately, however, there were also lots of vegetables. 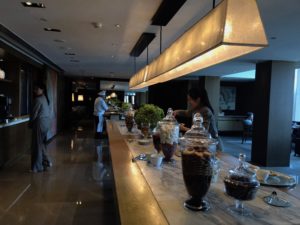 Looking along one of The Manor Club rooms

And then, of course, I wanted to see some of the other features that make Rosewood Beijing so memorable. We went up to the seventh floor lounge, The Manor Club, that takes the basic executive-lounge concept of ‘take a space and serve free breakfast and evening drinks’ there and seems to invent something unusual.  This does seem like a freestanding club, say along the lines of the Pacific Club in Bangkok, and incorporates it in the heart of a luxury hotel.  Yes, it has a full kitchen, but it also has a dedicated mixologist, a pool table, four real-look gas-fuelled fires, a smoking terrace and much more. SEE A DUCK VIDEO