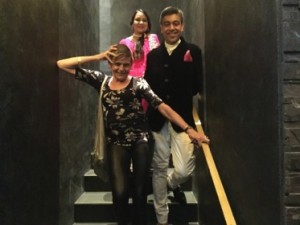 On the stairs into Breeze, Deepa and Anita Ohri

Deepak Ohri, here with his highly supportive wife Anita, specialises in turning hotels into sensational dining venues that happen to have rooms, sometimes hundreds of them, attached. He has done it in Bangkok and now, last week, Tuesday September 8th, 2015, he officially announced his Frankfurt venture to the local populace. Buses on the busy 11 and 12 routes around town feature d a tantalizing Lady In Orange, to be found at Breeze restaurant at 35 Bethmannstrasse. The fact that this is part of, or rather below, Frankfurt’s most traditional luxury hotel, Steigenberger Frankfurter Hof, will not be stressed other than as a location guide. The gal is intrigued by the way the hotel has exchanged what was a leased out Japanese restaurant for a stunning designer venue. 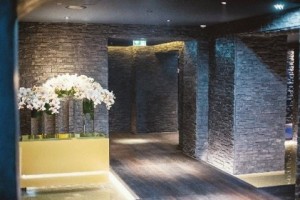 Unfortunately it is difficult to do justice to what the designers, 8inc, have done in producing this 70-seat restaurant. They are the masterminds responsible for all Apple stores worldwide – they are light and bright, while Breeze has a slate floor, with inset light tracks, and walls of small and uneven slate bricks become barrel-vaulted ceilings. Inner pillars help form alcoves, for private seating and for a 30-seat lounge. Add to this an enigmatic portrait of the Lady – female servers are also in orange, apparently the top fashionista colour right now. We sat at a private banquette area, two really comfortable tan suede-covered benches facing each other, divided from other such booths by bamboo branches.   I did not know what to expect but I suspected it would be a distant cousin to Nobu, and, under consultant chef Sam Leong, that is what it turned out to be. 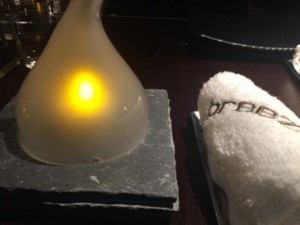 Our table was set with an inner-lit light and we had chilled towels as well as napkins, ceramic plates and chopsticks. I never actually saw a menu. Kevin, the server (dressed in slate grey, like all the guys), said the on-site chef, Poon Kam Loong, suggested lobster followed by fish (cod on poached egg white with a single head of bok choi) followed by chicken followed by wagyu and dessert. Hold the lobster and dessert, we said, and thank goodness we did. Each dish was artistic, not enormous but ample and I especially liked the crunchy chicken, which should have come with black rice but we said hold that. The sommelier, Denise Horlbeck, suggested Perrier-Joüet followed by a 2012 Huber Bombacher Sommerhalde Spätburgunder, a Pinot Noir from Baden. We non-Germans all commented that if only German winemakers could simplify their labels there would be much more call for their products from the rest of the world… 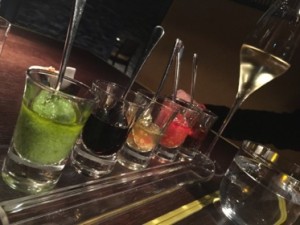 A range of colourful condiments

Condiments, actually quite spicy, stayed on the table throughout the meal, and some obviously like the extra additives. Interestingly, although I seldom take TripAdvisor seriously I did glance through the pre-opening reviews. As z_tromi from Abu Dhabi wrote: ‘My favorite restaurant is Hakkasan in London and Abu Dhabi but I guess Breeze will very likely beat it’. What a coup for Deepak Ohri, who has been working on this since the MOU was signed a year ago – and what a feather in the cap too for the restaurant’s host, the luxury hotel upstairs, to be able to offer its guests this, as well as a Michelin-starred Restaurant Français, Oscar’s bistro (replacing what was Germany’s first airmail post office), a cigar emporium, and wiener schnitzel, and much else, in room service.