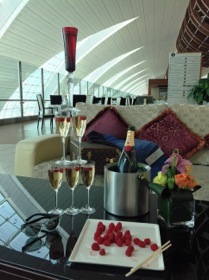 This is what Sybaritic Single has in mind….

Hello there, this is a GAG day (GirlAhead Guest, if you had not guessed)…

‘Once upon a time, the Sybaritic Single’s grandmother travelled to Cuba where she mastered the art of building champagne flute pyramids and making them sparkle with bubbles. Ever since, the family tradition which became known as ‘La Pyramide’ flourished and eventually migrated from household to luxury hotels, airport lounges and even onboard international flights.

‘Surprisingly, many hotels still make free with serving the most elegant of wines in ‘catering class’ flutes while most of the airline inventory is stocky and designed to withstand heavy turbulence. Naturally, that makes the glasses less than elegant. Barely any of them would complement a hotel suite, and definitely not the silhouette of the Sybaritic Single who fosters perfection in all facets of travel.

‘This is how the vertex of La Pyramide was born – a crystal Baccarat glass which took permanent residence in the Sybaritic Single’s wooden trunk a few years ago. The colour is red – because it is the colour of passion, courage and energy which symbolise travel. The flute has become a loyal travel companion and scored more airline miles and hotel nights than most travellers.

‘Sadly, the red flute is not particularly stable when things go turbulent and sometimes gets removed by careless room service attendants. Yet it has evolved into a code of elegant travel, recognised the world over. Rumors say that it has also become an urban legend among first class cabin crew of one of the world’s leading international airlines.

‘Secretly, for the Sybaritic Single the red flute crowning La Pyramide encapsulates a special meaning – a kaleidoscope of memories which illuminate the more-than-frequent jetset. Are not the most beautiful things made to circulate? And when will luxury hotels get in on the act?’