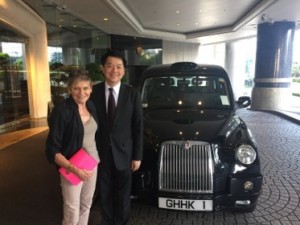 There is something decidedly splendid about a real London taxi, and by that the gal means a traditional black Manganese Bronze vehicle, now actually produced by Geely. Back in London itself, taxis are now a horrid assortment of shapes and colours, plastered over with advertising – it is almost enough to make you divert to Uber straightaway. Here in Hong Kong, however, Grand Hyatt Hong Kong shows that a luxury hotel can differentiate with its variety of vehicles. But then the 542-room hotel, now half owned by Abu Dhabi, has always stood out, ever since it opened in 2004. For a start, it dominates the Hong Kong Island waterfront in Wanchai. 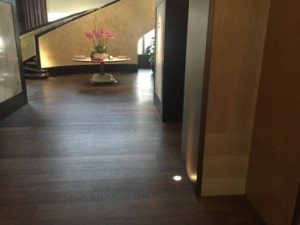 Look through Grand Club’s entrance to its sweeping staircase

It has one of the most imposing lobbies anywhere, two tall stories high, with four gigantic black columns and a big airy mezzanine. There are epitomal curving red-carpet staircases. Head up to the Grand Club lounge, and look at  its new make-over, finished this very month, after six months’ closure, by the Melbourne design firm, BAR Studio. You used to turn from the elevators to be confronted by the welcome desk – confronted is the right word for that feeling. Now the welcome desk has been moved through 90 degrees, so it is hidden out of sight, to your right. Ahead, you see another gorgeous curved staircase, taking you up 23 midnight-blue carpeted stairs to the upper part of the two-floor lounge. 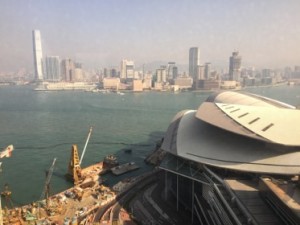 Look down, at the convention centre, and across to Kowloon

The re-do has given even more of a splendid view. Look down at the massive Hong Kong Convention and Exhibition Centre, by architect Larry Oltmanns of Skidmore, Owings and Merrill. This is home of Art Basel Hong Kong, and such other important luxury-level international fairs as Affordable Art, and the current Watches and Wonders, organized by the Fondation de la Haute Horlogerie FHH (this is an invitation-only event, featuring 12 watch houses, ten of them owned by Richemont). From the lounge, look across the harbour back to Kowloon, to its tallest hotel, Ritz-Carlton Hong Kong, to the left of the picture, and, centre right, InterContinental Hong Kong, cantilevered over the water, and, the other side of Salisbury Road, The Peninsula Hong Kong. 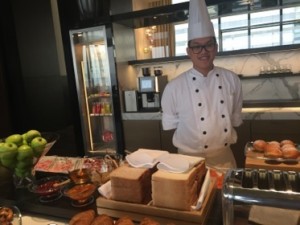 A chef is on duty at all times

But no luxury hotel’s club lounge works unless it has product, and ambience. Here, the breakfast and cocktail hours’ food is as spectacular as I expect from Hyatt. What is really special, in this lounge, is that the thoughtful GM, Philip Yu, offers complimentary alcohol all day long. His feeling is that if someone arrives on an early flight from the other side of the world, this might be just the time for a glass of bubbly before going to bed for a catch-up sleep (Philip Yu says the service is not abused and people drink no more, and perhaps less, if they can drink any time instead of having to drink up quickly, within a set time). On the ambience front the space is broken up into several areas, with general sitting and a private media room downstairs, and ceiling-high semi-walls upstairs. This means that those with kids can be accommodated away from business travellers and others who want peace and quiet. On behalf of the latter brigade, congratulations Mr Yu, we thank you!