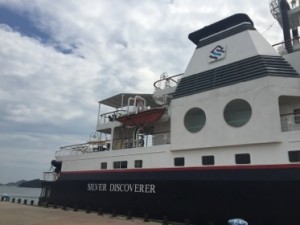 Yes, the gal is going to sea (AGAIN, one might ask?). Actually it is nine months since the last voyage and therefore more than time to see how a luxury-hotel-at-sea operates, especially in Japan, where service levels are so high, anyway.

The ship awaits, in the port of Kobe. It is Silver Discoverer, latest in the three-strong fleet of Silversea‘s expedition boats, and it has 96 crew for a maximum guest complement of 120. Who will be onboard? 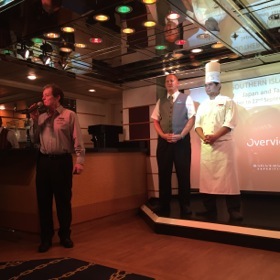 Data protection now means the traditional passenger manifests are no more so I shall never find out many of my fellow travellers’ names and backgrounds. Within an hour of finishing the mandatory safety instructions, however, I learn about ship management and the expedition staff. The Expedition Leader, equivalent of Cruise Director on other ships, is Moss Hills, born in Zimbabwe and now living in England, by way of South Africa. He introduces the Restaurant Manager, Robert, and the Chef Marcellino, and then the nine expedition staff. 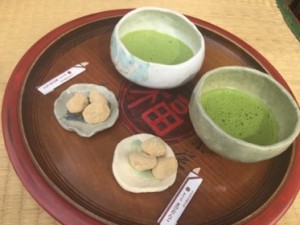 Now THIS is what you call real ‘green tea’

We have Kate from the Blue Mountains, and James and Travis, from Cape Town. Adrian and Simon are ornithologists, Anjali-with-the-tattoo is marine biologist, Amy is Japanese culture and Peter is historian. Please ask us questions, any time. Unlike on some other expedition ships, here Moss and Kate, and I am sure other expedition staff, come and sit with guests – we all share a breakfast table outside, on the pool deck (and yes, the pool is really big enough for swimming, and, while on the subject, the Technogym comes with an Arke equipment set, well done). I did not order green tea for the first breakfast. Perhaps I will, tomorrow. 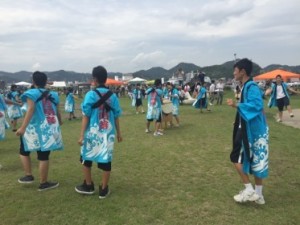 Just like in any land-based luxury hotel, the discerning traveller appreciates not only being welcomed but being seen off, too. Kobe laid on a sail-away performance, two extremely fit young men in traditional skirted gear managing three sets of drums. For half an hour the frenzy got louder and louder, in a rhythm of which even Dr Dre would have approved. It was brilliant. Now, at our first stop, Uno Port – for Okayama – we are welcomed by schoolchildren doing traditional dances.