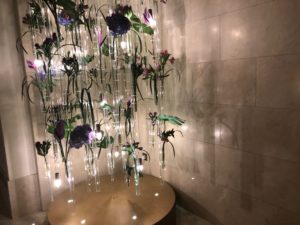 There is always something new at Four Seasons Resort Dubai at Jumeirah Beach – this is the luxury hotel that, when it opened December 2014, had one evening a week when it offered manicures with cocktails, which meant Ladies Who Lunch could, later in the day, carry on nattering while they were Epi-ed, or whatever).  That has gone, I am told, but there are still curios, the whole time.  Last December, the Christmas tree hung upside down – see the image above.  At all times lobby flowers, in a move far away from the Four Seasons norm, are displayed, almost without any so-called arrangement, in hundreds of small pots that appear to be climbing columns and walls. 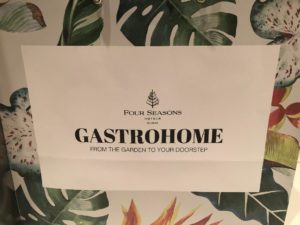 Food to go, at home or for events

It is all the fault of, or perhaps it is thanks to the creativity of, the hotel’s Florentine boss, Leonardo  Baiocchi.  It could be that his childhood, moving with his parents around Alitalia’s bases in Africa, taught him to be resourceful, and yet always go one stage further than necessary.  Here, in Dubai, working with Uber, he recently introduced Gastrohome, a seemingly standalone home delivery food service. The foods of course are all produced in the kitchens of the 236-room hotel but the subsequent diners have no idea that they are eating ‘hotel food’. Of course the food here within the hotel, as in any Four Seasons, is superb, but it is still a clever marketing tack to feign independence. 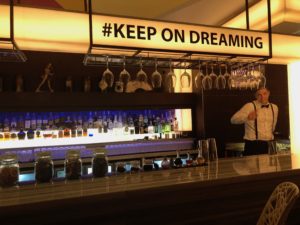 A serving counter at Mercury

During this brief visit to Dubai I dined with Leonardo Baiocchi and his equally ideas-oriented back-up, Bob Suri, in Mercury, the hotel’s outside dining and party venue.  Just as Gastrohome stresses ‘from the garden to your doorstep’ you certainly get the impression that everything here is similarly à la minute – pizzas are a big thing, but you can opt for Tsarskaya Oysters #2 or Royal AmStur Caviar, or Fasona beef or Loch Fyne salmon tartares, and so on.  Mercury seems so interactive: the bar staff are lively, encourage conversation.  Above all, this place is fun. 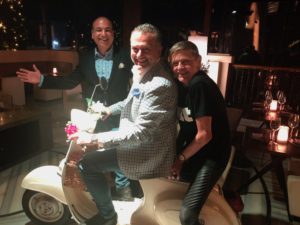 I am told, by the way, that those in the kids’ club also have fun, to such an extent they sometimes do not want to rejoin their parents (perhaps we need a new industry initiative, give up rating luxury hotels by size of swimming pools and switch to where the fun readings are on barometers both for staff and guests).  By the time I left Four Seasons Resort Dubai at Jumeirah Beach I was roaring with laughter, partly at the sight of Mercury’s permanent Vespa, ideal for selfies.