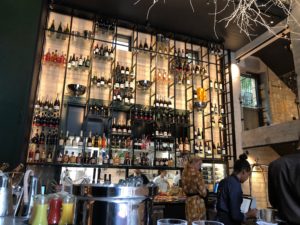 Why should anyone in Copenhagen call a hotel Herman K?  It turns out, the gal learned, that here at Bremerholm 6 in the centre of the city, there once lived Herman Kähler, 1846-1917, who gave his name to a ceramics company (NOT to be confused with the Wisconsin-based Kohler bathroom furniture manufactory). Then, in 1963, the site became an electricity transformer station and then, in early June 2018, it opened as Hotel Herman K.  Go in and you are in the body of the transformer building, for the most part unchanged. 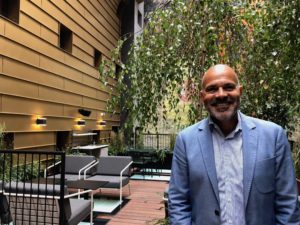 The 40-foot lobby space is as-was, with gigantic green metal doors still hung, and presumably functioning, to one side.  The boss of all this, Karim Nielsen, CEO of Brøchner Hotels (named for its owner Søren Brøchner), says he hates formal receptions.  Here a poly-sided counter acts as 24/7 reception-concierge, and coffee station, and breakfast bar, with a copious buffet set up behind it.  It is so much more friendly this way, he says.  Today’s travellers do not spend time in bedrooms, they want to network. 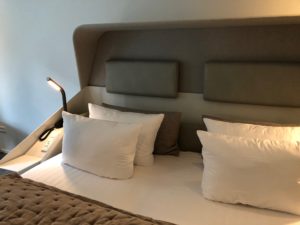 At the 31-room hotel, the rooms are intimate, with memories.  Room 305, for instance, has a private balcony – if you can call it that.  A 2.5-foot wide concrete shelf, about 15 feet long, juts out over the void that is the cavernous lobby below – fortunately the shelf has a glass protector to stop you falling over.  All bedrooms have unique bedheads, specially made for the hotel and based on airlines’ first class seats, with inset sockets, USB ports and controls for the Bose sound system. The hotel does have other unique features, too. All food, at lunch and dinner, in Roxie restaurant or in your room, is leased out to Nicolai Nørregaard of Kadeau. 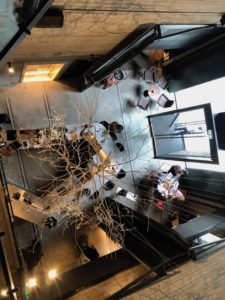 Look down at the bar

Since Kadeau has two Michelin stars, this really helps bring business to Roxie, says Karim N. Kadeau has put in a charming young lady chef, Anika Madsen – her best-seller, she says, is sweetbreads with Danish potatoes, namely heavily-buttered tiniest new potatoes, still with the skin on. Kadeau gets publicity from this hotel, and from its siblings in the Brøchner portfolio, throughout Denmark.  Karim Nielsen is, himself, very into wine.  Stay in any Brøchner hotel and there is a free wine hour, from five o’clock. He also brings back from his frequent travels bottles of local liqueurs and digestifs.  At ten o’clock, here at Herman K (though not in other Brøchner hotels) a cupboard is opened in a quiet, ground floor sitting room – the Chambre – to reveal super after-dinner drinks from all over the world. And, during the next 60 minutes, Night Cap Hour invites you to try as many bottles as you like, on the house.  I really am discovering some one-off luxury hotels these days!