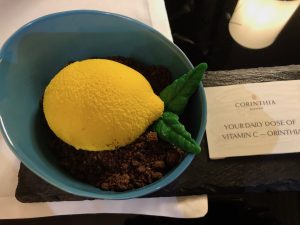 Corinthia Hotel Budapest is a highly successful palatial-luxury hotel in the Hungarian capital, says the gal.  It opened in 1896 as the Grand Hotel and, after several changes of clothes it emerged as the 439-key Corinthia in 2003 – that opening party was a ball, literally, with the hotel’s hostesses in the shortest black frocks in the business. The hotel – see above – has the advantage of being old and new. Take some of the 215 team members.  Shown here, with GM Jonathan Pace, is Tibor Meskál, 77, who was an 18-year old hotel apprentice when the Grand Hotel Royal, as it then was, opened in 1961. In 1966, aged 23, Tibor Meskál – seen above, on the right, with GM Jonathan Pace – quit his job as room service manager and worked variously in Australia, Italy and the UK,  and on cruise ships. 30 years later, he returned to Budapest and moved to the Corinthia for its 2003 opening. This is my ars poetica, he famously says; and he leads an hour-long hotel tour every Tuesday and Thursday at 9.30 a.m. He is also often in the lobby to greet guests, at any time. 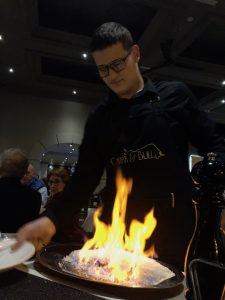 I was in suite 4301 this visit, overlooking Erzsebet. The design, by Martin Goddard of Goddard Littlefair, certainly has more than a touch of Central European tradition, which I really liked. My welcome fruit was enhanced by a lifesize lemon, a bite of vitamin C which turned out to be a yellow-coated meringue fluff. The food here was an amazing surprise – it has upped its offering several rungs since my last stay.  We ate in Caviar & Bull, a very agreeable casual steakhouse that opens directly off the street (even on a Sunday it was full, and on Fridays and Saturdays it always does at least two sittings), The menu is overseen by Malta’s celeb chef Marvin Gauci, whose philosophy is simple, choose the right people to work with and never compromise.  Tonight the serving team was really enthusiastic – I had a Black Angus tartare with Russian caviar, pickled capers, shallots and wasabi icecream, to go with Nagy Eged Egri Bikavér 2015 Stumpf Pinccészet 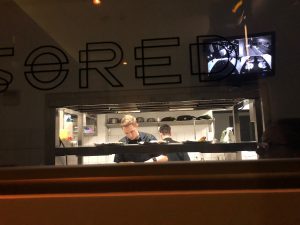 Then came the biggest surprise.  Come and see our secret restaurant, I was told. CENSORED by Caviar & Bull is just that.  You literally enter through the back panel of a closet holding diners’ coats.  This takes you into a miniscule wine room, past a kitchen window and into a space just big enough for ten tables for two.  The walls are white LED screens and as you proceed through your set menu, they turn into a 360-degree moving panorama to accompany the menu, taking you from Hungary to Spain and Russia, and then, after a break, on to Japan, China, the USA, and Brazil.  This really is a unique restaurant in a luxury hotel. SEE A VIDEO BELOW