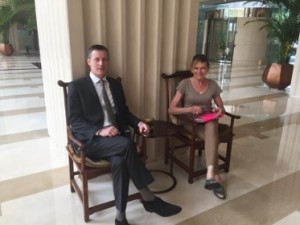 GM Nick Porter, in the lobby

Nick Porter, who runs one of Beijing’s most Chinese-look luxury hotels, The Regent Beijing, suitably has pairs of traditional hardwood chairs in the 500-room hotel’s soaring and airy marble lobby. The gal commented on the tinkling of a grand piano on the second floor gallery day and evening. Even at breakfast, the chic lady pianist wore a diamanté-encrusted full-length black dress. 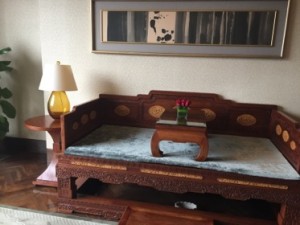 The hotel is owned by septuagenarian Madame Chan Lai Wa (who also owns Park Hyatt Melbourne). It is suitably traditional. I loved the Imperial Suite, #1956, which was a testimony to what marble and sandalwood can do. The furniture, including this day bed, was far too heavy to move. Under the day bed, under sofas and under the main bed were oval pots, about six inches long and the wrong size and shape to be traditional chamber pots. I never did discover what they were for. 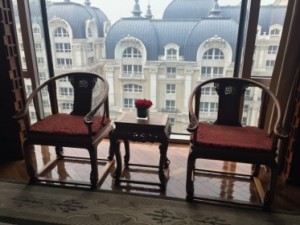 I look out across the street at a Versailles pastiche

I looked out, across Jinboa Street, at one of the world’s worst pastiche hotels, a copy of Versailles (oh dear, think how truly gorgeous Trianon Palace Versailles is, and then look at this – I went into its cavernous lobby, saw fewer than half a dozen people but no fewer than 20 photographs of the owner, David Chow, with such highly important VIPs as the President of Andorra). Back to lovely, friendly, warm The Regent Beijing, where nothing is too much trouble. 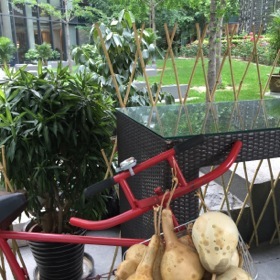 The beautiful garden has barbequest Thursdays to Saturdays

The hotel is full right now, with American tourists, and with Australians (the 72-hour visa-free concept is great for short trips). There are also 200 Russians, here on an incentive. Many of all nationalities, including Chinese, love sitting in the lobby, looking out at the garden. Yes, this is Beijing’s most authentic urban resort in that it has a formal garden in front and, behind, an informal area where barbecues are held, Thursdays through Saturdays, summer only. It is all-you-can-eat burgers, sausages, salads and dessert, with a Belgian draft beer, for reminbi 148. Memo to self: next time, plan a weekend visit. 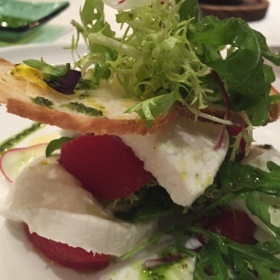 But I was absolutely thrilled to dine at Daccapo, the Italian restaurant which attracts many visitors from nearby hotels. There were two tables taken when we arrived at seven but two hours later all 60 seats were taken. I started with caprese, and finished with tiramisu, in a cup, and it all went very well with a glass of La Velona Sant’Antimo Rosso 2011.  I remember this luxury hotel for so many things, including eating and drinking Italian with a very-English gentleman who speaks both Danish and Mandarin. His mantra, he says, is understated luxury in the heart of Beijing.