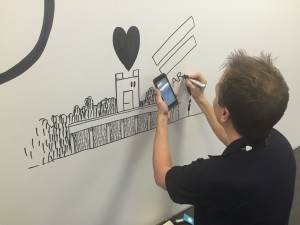 Before we leave ILTM and the best-ever gathering of luxury hotel owners and operators – in Cannes, November 30th through December 3rd, the gal wants to show the do-it-yourself wall. 27 feet long, from left to right. Concept artist David Thomas, Co-Owner and Creative Director of Everywhere Brand, took ideas that the nearly-4,000 delegates had suggested and transposed them, with felt-tip pen, on a white board (let us hope that after all that bending he was able to take a few minutes’ R-and-R to go to the ILTM Spa Salon for what must have been a much-needed massage). There were lots of creative ideas at this year’s ILTM. Read more about the Brand Karma‘s virtual reality VR. 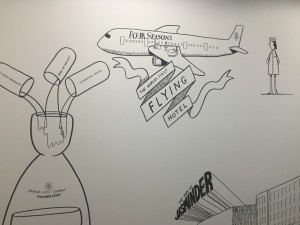 Coincidentally there was a lot of talk about VR right now. One of my media heroes, Michael Skapinker in the Financial Times, is a bit sceptical about Apple Watches – apart from anything else, a salesman in a Los Angeles Apple Store told him about the hair-raising return rate. But when it comes to VR, 47% of 1,581 polled in the UK want a headset… Back to ILTM. An American Juice Company bar featured on the wall, just below Four Seasons’ plane, one of the best examples of luxury hotel marketing of this century. The company does not own or even lease the plane, but it gets all the publicity. Now that Four Seasons has just appointed a new CMO, Chief Marketing Officer, from the Tim Horton’s coffee company, and before that brewing and Kraft, maybe Four Seasons will start letting others pay for branding on paper cups, beer cans and chocolate bars. 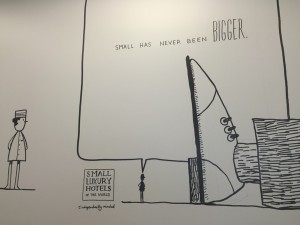 Small Luxury Hotels has also made a strong new appointment, CEO Filip Boyen, who honed his skills at Hyatt and then Orient-Express, now Belmond. Small might be in its name but not in its culture. Mr B is going to take the company onwards and upwards, bigger – but getting rid of the weakest pearls that always exist in any necklace – and better. Small Luxury sensibly made the decision, three years ago when the ILTM organisers, led by Senior Director Alison Gilmore, opened up an eyrie-like third floor of the exhibition hall, to join The Leading Hotels of the World and Relais & Chateaux up there. The result is an airy, spacious tripartite exhibition-within-an-exhibition, almost the equivalent of a hotel’s club lounge. Many migrate up there. I am told Relais‘ lunch offering was superb (well, what do you expect from the French?) and, personally, I thank Leading for the quality, flavour and taste of the apples on its stand, great for postprandial mouth-cleansing. 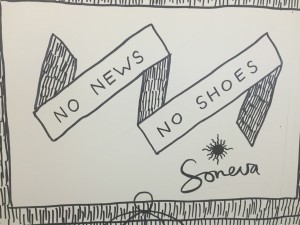 Sonu Shivdasani, who had starred in film-making along the Croisette a couple of days ago, also saw his Soneva brand alongside other luxury hotels here on the do-it-yourself wall. What a lovely idea this was. Let us hope that ILTM 2016 has a similar wall (the dates, by the way, are December 5-8).