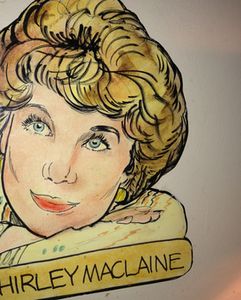 Shirley MacLaine ‘at’ The Palm Chicago

Shirley MacLaine has an instantly recognizable face, even as a cartoon caricature.  Born in 1934 as Shirley MacLean Beatty – yes Warren Beatty is her baby brother – she was meant to be a character, from the start. Her Canadian mother was a drama teacher and named her little daughter after Shirley Temple. This particular cartoon of her is on the wall of The Palm, Chicago, an absolutely not-a-seat-to-be-had restaurant that just happens to have a luxury hotel wrapped around it.   The gal wondered at the name.  Chicago’s East Wacker Drive has never seen a palm tree in its life… 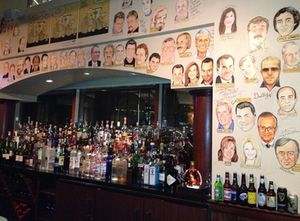 Restaurant walls are covered in caricatures

Back in 1926, long before even Shirley MacLaine had been thought of, two guys from Parma, Pio Bozzi and John Ganzi, opened an Italian restaurant in New York.  They could not spell, so Parma somehow became Palm. They were open-hearted restaurateurs, and allowed penniless artists to pay for meals by painting original portraits on the restaurant’s walls.  Hence began the tradition that endures today, in the Palm restaurants throughout North America.  The Chicago Palm, in Swissôtel Chicago, is brilliant.  It is two floors, with a folksy wood staircase. The walls are covered in cartoons, you can sit in quiet booths or at open tables, and waiters wear pale khaki shapeless cotton jackets over full length white aprons. 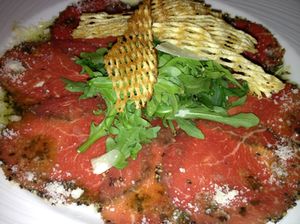 This is the ideal menu for travellers – and local residents, who love dining here – and anyone who wants to eat what they want to eat rather than what the chef imposes.  There are classic Italian dishes, dating back to 1926, and a range of house specialties and basic proteins that you can have cooked any-way, with what-ever.  Say you start with a classic carpaccio of beef tenderloin, with arugula, lemon, black pepper, olive oil and a halo around of shaved Parmigiano Reggiano and, suggested by waiter Sal, a Fogdog Pinot Noir 2009 Freestone Vineyards from the mighty Joseph Phelps empire.  Go on to a steak, or to salmon (blackened, broiled, grilled…) and fabulous big-helpings of veggies on the side. 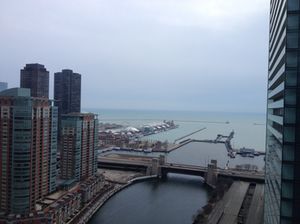 Unless you live in one of the Lakeshore East-vicinity residential blocks that soar all around, you do well to overnight here at Swissôtel Chicago, in one of its 661 rooms.  Choose one like, say, 3504, to get a good view east, to Chicago River’s meeting with Lake Michigan at the Chicago Harbor Lock. To your far left is Navy Pier, and a Ferris Wheel. Closer in, by Lakeshore Drive, is where water taxis leave.  From there, too, you board the highly recommended architectural tours, 90-minute river circuits that introduce you to many of Chicago’s wonderful old buildings (the tours only run April through November). 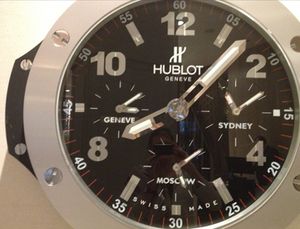 You will not be late for your sailing, or whatever other commitment you have in the diary, if you are staying at Swissôtel Chicago – there is a metre-wide Hublot Big Bang clock on a wall at the back of the lobby.  Hublot, which is headquartered near Geneva, is part of the LVMH group, and it has some interesting ambassadors, including Usain Bolt, who presumably does not wear a chunky Big Bang when he is searing through the seconds to the finishing line.  Another ambassador is Kobe Bryant, who interestingly is also an ambassador for Turkish Airlines (‘Europe’s favourite airline’, as the advertisements say).  Istanbul’s Swissôtel – The Bosphorus, is another amazingly efficient world hotel.  You even save time at its sibling, here in Chicago, in getting to your floor.  Just as at Hilton Baku, in Azerbaijan, you punch in which floor you want to go to and the monitor tells you which elevator to go to, and it stops at your floor, and not at intermediate floors to pick up others.  Every second saved is so valuable in today’s world. 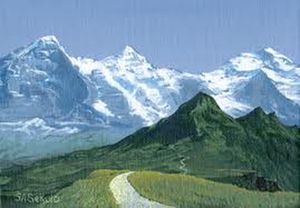 The world’s image of Switzerland

Yes, here is Chicago’s piece of Switzerland, with its efficiency, and time-keeping, and hygiene – there are hand-sanitizers in many public areas, and, following the cruise industry norm, these should be standard in all luxury hotels today.  But it is also the world, here in Chicago.  At breakfast I read a story on Russia while eating Greek yoghurt and wholegrain toast with French jams.  One may be far from Switzerland’s image – see photo – but you feel part of the world. Instantly recognizable, right?