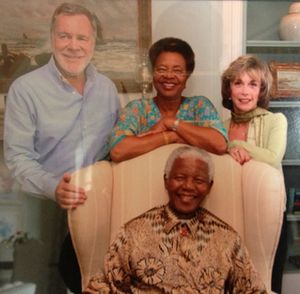 There are photos galore of Nelson Mandela at the Saxon Boutique Hotel in Johannesburg – he lived at that luxury hotel, on and off, for a time, and he also stayed at Shambala, similarly owned by insurance magnate Douw Steyn. There is a prize photo of Mandela, with his lovely wife Gracie, in Pezula Castle, Knysna, on the stunning Garden Route just under 400 miles east of Cape Town.  The gal was invited to Pezula to meet with the castle’s owner, Keith Stewart (seen in the photo with his wife).  The ten days that the Mandelas stayed with him, says Keith, were the proudest in his life. 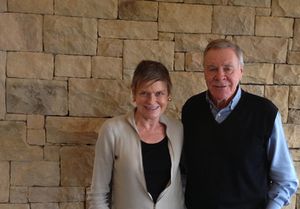 And quite a life that has been. After coming out of the Rhodesian Air Force with a handshake that was paper, not golden, he headed for the USA and later invented, and brilliantly sold on, paper feeds for photocopiers.  Back to now-Zimbabwe, he bought the city’s famous Borrowdale Brooke Golf Course and came south to the Cape to check what Jack Nicklaus was up to at Simolo.  While there he fell in love with the wooded hill area immediately inland from Knysna’s Noetzie Beach, and he bought a bit of it, like 7,000 acres. 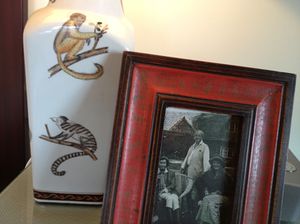 Is this the original owner?

It came with a weekend house that was literally on the beach. It has castellated pinnacles on its roof, like a sandcastle, so the man who built it, Alan Henderson from Bulawayo, called it a castle. During World War II it had been used for recuperating troops. Keith Stewart and his architect, Rick Brown from Cape Town, transformed it into the most amazing two-floor house, with dining for ten and three ensuite bedrooms. I like to think that a framed photo by one bedside is the Henderson family. 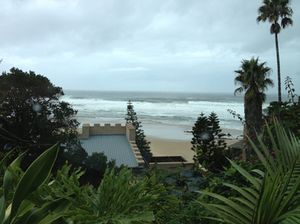 Look down at the castle, beach and ocean

The final drive down, via a winding incline of maximum degrees, allows you to  see the house. You say oh my gosh as you see its private pool, and the pristine beach beyond (this is known as one of the cleanest and most beautiful in South Africa). Take the entire castle, as so many do (it will sleep up to ten) and you really do not need to move, but if you do you get your own vehicle and driver so no need to attempt to negotiate that incline. There are two single-room villas within a few yards. 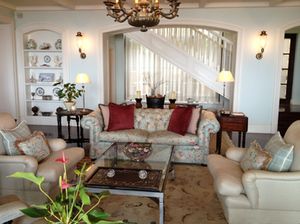 The interior of the castle is exquisite, toned-down Architectural Digest, with subtle antiques and lots of books (a big tome on Mandela, not surprisingly), and old maps of Africa that show the island of Madagascar to be almost as big as the continental mainland.  Keith Stewart’s favourite designer is another Cape Town guy, Keith Mehner. He likes to work with those he knows.  Since the castle is only sold full-board you also get your own chef, but if you are smart you will also head up to the hotel that Keith Stewart (all these Keiths!) also built on his land. This, Conrad Pezula, has as its chef Geoffrey Murray, whom Keith (Stewart) enticed from one of his favourite hotels, North Island. 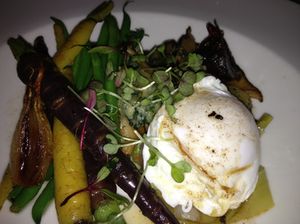 Geoffrey Murray is an American character, with a philosophy that includes local food, as organic as possible.  He has his own vegetable garden (there is plenty of room on that 7,000-acre plot), and he surprises. Choose his Organic chard and ricotta gnudi, with roast young vegetables, leeks, a poached egg, sherry vinegar and truffle brown butter and you think you are getting proper gnudi, namely gnocchi made with ricotta.  No sir, here, at this luxury hotel that Keith (Stewart) owns, you get the vegetables and the egg and, if you put your eyeglasses on and squint at the photo, you might just make out a couple of peanut-sized gnocchi (sorry, gnudi).