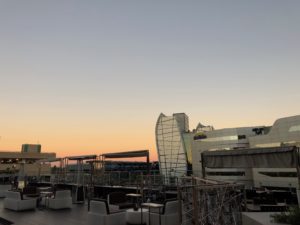 In the three and a half years since the gal was last in Johannesburg a lot has happened. Take retail and dining out, symbols of a burgeoning middle class.  At the always-young Sandton Sun, built in 1984 as part of South Africa’s planned version of Wall Street, what is now called Diamond Walk has, with the exception of Hermés, every top brand imaginable – see a video below. The owners of the 326-room hotel make more money from retail than from meetings, so they turned their conference centre into yet more shopping.  They have also invested heavily in the hotel’s interiors. 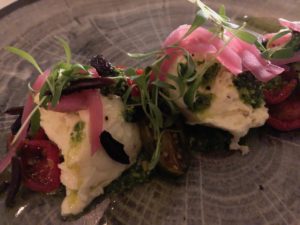 I said WOW when I entered suite 1930. Local designers Blacksmith have gone for greys and white, with some wood flooring, textures everywhere, and lovely oil-look paintings that give such a sense of place. I had a soft sunset here, bush in the heat of the day there. I knew where I was. 65% of guests are on some kind of business and this is one of those soothing environments which somehow help you to cope better.  And the food offerings, down in the one restaurant, could be called ‘brain food’.  I started with a caprese and then, continuing in my location mode, ordered an ostrich fillet, which actually looked more like a stringy flank steak (never mind, it tasted fine). 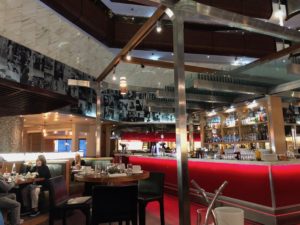 The restaurant has an open kitchen, and extends to a large outdoor terrace that is highly popular summer-long, especially post-work at the end of the week. The indoor section of the whole complex occupies most of the sixth floor lobby, with an open atrium soaring above up to the 20th floor. Immediately over the restaurant, at the seventh floor, is a frieze akin to that in Girandole in Park Hyatt Tokyo, but here the hundreds of black and white images are of staff members.  This hotel, which is independent and not now affiliated with any consortium, runs in tandem with its conjoined twin, a franchised InterContinental, with 700 employees between them. 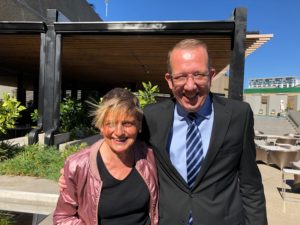 Rob Jasper, who oversees both hotels as well as directly running Sandton Sun, is what you call true hotelier who oozes passion and concern. On arrival I, like everyone, got a really informative letter from him, personally introduced and filling me in on hotel opening hours, and things like that, as well as local things to do.  Although he lives half an hour away he was in, as always, by 7.20 in the morning.  And because he listens, and notes every detail, he understands that for busy travellers instant and fast WiFi coupled with simple features – think shower controls – help provide the modern elements that today’s travellers consider hotel luxury. NOW TAKE A STROLL ALONG DIAMOND WALK AND THEN SEE SUITE 1930