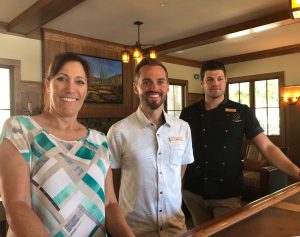 Welcome from Tina, Ryan and Thomas

There are few ways of arriving at a luxury hotel, resort or hideaway to compare with a helicopter.  The gal was picked up from her last port of call, driven to Scottsdale airport, about 20 minutes from Sky Harbor, and to Western Sky Helicopters, in the adjacent block. There, thanks to the capable pilot of the five-passenger Bell 429-55, the party flew over Lake Pleasant, above, a 3,700-acre reservoir created in 1927 by the Carl Pleasant Dam. Shortly after, and 20 minutes flight time in all, the helicopter landed in the front garden of the retreat-luxury Castle Hot Springs resort, northwest of Phoenix. The reception party included GM Ryan Tomm, Tina Newman, who heads sales and marketing, and mixologist Thomas Burris. 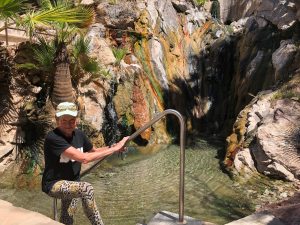 The hottest of the hot springs

Castle Hot Springs, in 1,110 acres of privately-owned land, gets its name for a reason. From about 22 feet above the main lodge, a stream falls nearly vertically via a series of pools: it emerges from the mountainside at 120 degrees, and, thalassotherapy style, a lower pool is 110 degrees and the lowest is 90 degrees. Each pool is a divinely serene meditation and swimming spot. Ever since the lodge was first built in 1896 this has been a retreat, and so it continues. Today there are two rooms in the lodge but I much preferred the 29 individual villas dotted around the grounds. Spring Bungalows, set up the steep incline behind the lodge, do have Toto toilets but I think I would choose a Sky View Cabin, down on the flat, just below the lodge. Number 31 is closest to the lodge but all Sky View Cabins have pastoral views over the immediate grounds. 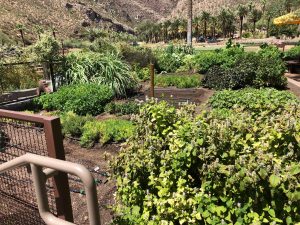 Part of the luscious vegetable garden

Wherever, rooms have heritage etceteras but are highly modern – apart from telephones (nil) and televisions (nil). Most cellphones do not work, but WiFi does. Compensate with real books, and games, and espresso machines, and lots of exercise. There are watersports on Lake Pleasant, and you have biking, and of course swimming, and massages. What will also excite horticulturalists, naturalists and organic nutritionists is the garden. The head gardener, Ian Beger, who will have a team of three to help him full-time, loved this place so much he wanted his family to buy it.  Now he has the best of both worlds, a paid job doing what he adores.  Get him talking about growing ground-shade plants to shield more vulnerable species and you learn up to PhD level in no time. 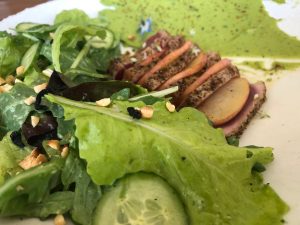 Oh what a salad!

Everyone here, indeed, is passionate about the place. GM Ryan Tomm moved here, with his wife and toddler, from an urban Hilton – oh what a change. The eyes of Harvest restaurant’s chef, Chris Brugman, a would-be lawyer, light up when he talks about the produce he gathers, and uses within minutes.  Yes, the tuna was brought in but look at the salad he composed from some of the 300-plus herbs and vegetables that are grown here (the gardeners start at 5.30 a.m. because of the heat). It was 115 degrees last week, but it will have cooled down perfectly by the time the hotel re-opens on 7th October 2019, running through to 21 June 2020.  Also, at 2,000 ft ASL it is generally about four degrees cooler than Phoenix.  This is indeed a one-off and charming luxury retreat, related only to such thalasso venues as Dunton Hot Springs in Colorado, which also has heritage, and to ForteVillage Resort in Sardinia. But it is unique. NOW JOIN IN ARRIVING AT CASTLE HOT SPRINGS BY HELICOPTER, AND THEN SEE A ROOM