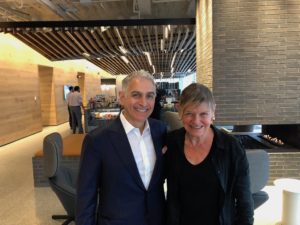 Hyatt is not only headquartered in Chicago but it has 20 hotels there, including the massive 2,019-room Hyatt Regency Chicago (this hotel is two towers, built in 1974 and 1980). At luxury level, nothing beats the unforgettable Park Hyatt Chicago, completely rebuilt in 2000 – its art includes an original Miró drawing and, also on the seventh floor, some whimsical sculpture by Japanese artist Mieko Yuki (she also did the tiny heads in elevators at sibling property, Park Hyatt Tokyo). But that day, the gal headed for another art experience, Hyatt’s new corporate headquarters 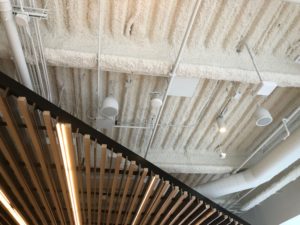 I was amazed by even the atrium of 150 North Riverside Plaza, a 54-floor cantilevered skyscraper by architects Goettsch Partners.  Since it was finished in 2017 it has variously been called the tuning fork’ or ‘the guillotine’ – critic Blair Kamin describes it as a ‘persuasive blend of the pragmatic and dramatic’. Tenants already include not only Hyatt Corporation but Grey Street Capital, The Pritzker Organization, Strategic Hotels and Wanxing.  All those working there have the pleasure, when coming into the atrium, of looking at Judy Suh’s 150 medium stream art, shown above. 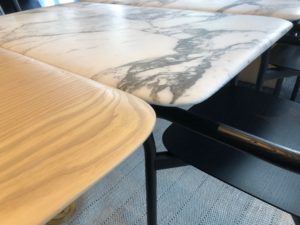 Up on the eighth floor it was horizontal rather than soaring vertical space that dominated.  As I waited for Hyatt boss Mark Hoplamazian I looked up at the ceiling, partly merely concrete-clad utilities. I looked out of all-wall windows down at the river: when Mark Hoplamazian arrived he enthused about the calming effect of being above the water, and he tries to spend the odd five minutes here and there just meditating and watching the myriad of craft, from kayaks to tourist cruisers, going back and forth.  He finds this new space, which houses over 1,100 Hyatt people, inspirational, though I heard from one of his colleagues that not everyone appreciates the hot-desking. 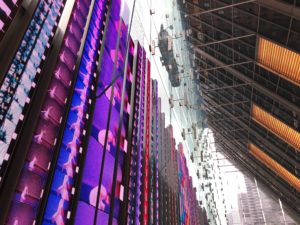 More of the light wall

Just on a short visit I did still have time to realise how sensual these headquarters, with their Gensler interiors, are.  Tables, set next to each other, might be marble, or wood, but all have satin-smooth edges.  On my way out, I looked again at Judy Suh’s incredible art work.  Born in Korea, she studied art both at Northwestern University and at the Slade in London, and this work, formed of 89 vertical LED blades, is total 22 feet high by 150 feet wide (it showcases Chicago’s arts and crafts). As I walked on I thought how so many Hyatts, especially Park Hyatts, similarly display the local, and traditional and modern art forms, and engage all the senses.  Of course Paris, Milan, Shanghai and Tokyo are top of any arts list when it comes to unforgettable luxury hotels.