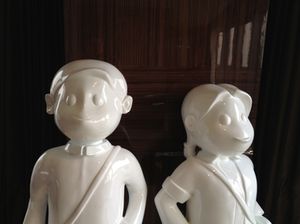 If only sculptures could talk… Jin and Jin (which is which, which is her and which is him?) would have lots to say to each other.  This charming fibreglass and baked enamel pair are by a female sculptor, Laurens Tans. They stand at the terrace door of the 26th floor club lounge at Four Seasons Chaoyang, another of Beijing’s top-class new luxury hotels.  This one has over 5,000 pieces of original art, including, hanging in the tall lobby lounge, a 12-foot tall ‘Chinese scene’ formed of nails stuck into a cream background.  The gal has a feeling that Jin and Jin would be chatting about the hotel’s forthcoming Palm Springs entertainment zone, with restaurants and bars and gardens, outside on a sixth-floor terrace above adjacent retail. 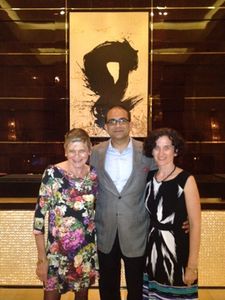 Why Palm Springs?  OK, it evokes memories of California, but the real reason is that one of the equal-share owners of this Four Seasons is Zeng Wei, whose company, Palm Springs, has real estate developments, plus golf courses and much more, all around China. He is an absolutely charming man – he was hosting dinner in one of the PDRs, private dining rooms, attached to Cai Yi Xuan restaurant here.  I had dinner with Sanjiv Hulugalle, the Sri Lankan-Brit who runs the hotel, and his Romanian wife Alice, and afterwards we were invited to go around the PDR’s table to say hello to everyone (top people love this place, by the way – some of them are invited by Sanjiv Hulugalle personally to buy the hotel’s personal  loyalty card, it costs an arm and a leg but gives them the much-desired recognition). Zeng’s youngest daughter, meanwhile, had great fun sitting under a side table. 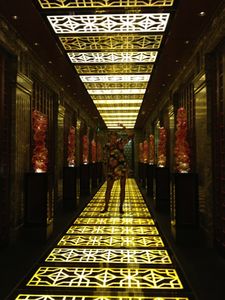 This is a hotel that makes you feel exuberant.  You want to swim – in an infinity pool, with big circular hot tub, looking out at the Chaoyang area around.  You want to leap – as I did as we walked along one of the hotel corridors – public area, not on a bedroom floor! There are some outrageous colours.  MIO Italian restaurant has the increasingly ubiquitous Czech chandeliers, but here they are clear and crimson drums stuck to the ceiling.  You sit at black glass-topped square tables, and, cleverly, when there are only two or three of you an upright-C extender is rolled up, to provide more storage space (we needed this, if only because of the many side dishes that came with my braised veal cheek). 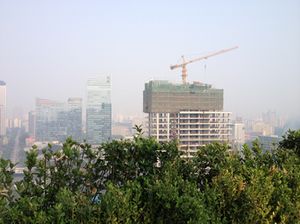 View from the Club lounge terrace

Back up at the 26th floor lounge, I marvelled that is one of the rare club lounges that not only gives ample outside terrace space but offers a stunning view.  Of course the lounge at Athenaeum InterContinental Athens has the Acropolis in sight.  Here I look down at the neighbouring Kempinski Lufthansa Center, and across at skyrises, some already up and running and others still at construction stage. Perhaps some of these are, like the hotel, at least partly owned by Palm Springs.  I decide to explore, down at ground level. 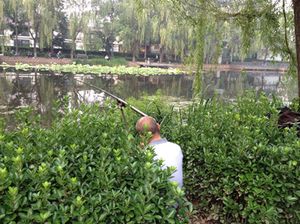 Calm is fishing in the canal…

Turn left out of the hotel, past the Four Seasons Residences, and I get to Liang Ma canal.  I have been here before, and it feels welcoming to be back.  Early morning, this is where fishermen (sic, no women) congregate daily, sometimes to say a few words to each other but mainly, solitary in their thoughts as they wait patiently for their rod to jerk.  Creativity comes best when alone rather than in thinktanks, I heard someone say today.  If this is true, these fishermen must be Nobel laureates. 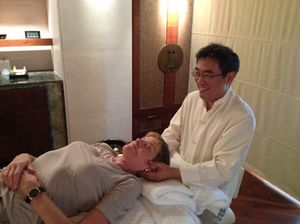 ..or a session with Dr Lan

It is certainly de-stressing.  To continue the calming feeling, I have a meeting with Dr Ji Rui Lan, the osteopathic surgeon whose traditional Chinese medicine (TCM) is legendary in town.  He holds a clinic here, at this luxury hotel, whenever requested. Take shoes off, like down, clothes all on.  He feels around my belly, knocks on both hips and immediately asks about a foot injury. At this point his male assistant, quietly given instructions, takes over to perform tuina, TCM massage, working on the eight ‘gates’ that Dr Lan has identified. Stress in my upper shoulders requires lying on my side, the upper leg at an angle. That arm is held upright, and prodding goes straight into places which evoke ‘oh gosh’. But he frees whatever. I am already addicted, TCM is the answer…. Dr Lan takes over, and finishes with a Buddhist chant to encourage internal air flow.  Now, says the gal, it is time for a tour.