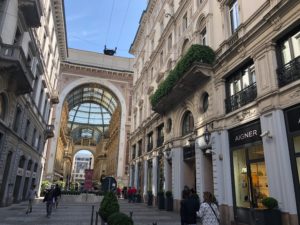 Hotel on right, Galleria ahead

Park Hyatt Milano is a luxury hotel right next to great Italian shopping, and that says a lot. Come out of what was built in 1870 as a bank and turn right and you are immediately in Milan’s most famous historic mall, Galleria Vittorio Emanuele II, built in 1865 by architect Giuseppe Mengoni. The photo on the left shows how this is a Park Hyatt that has a discreet front entrance – as does, admittedly, Park Hyatt Paris-Vendôme, which the gal has several time walked right past instead of stopping and going in.  But regulars know this entrance of course. Much of the business is from the USA, with UK coming in second.  In summer the 115-room hotel is regular base for Middle Easterners, some of whom take day trips to Lake Como. 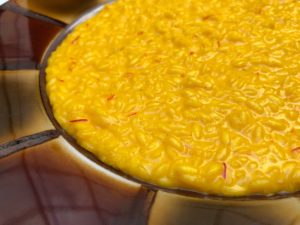 I was there for lunch with two lovely people who make this hotel work. Ilaria Bucci and Nicola Ultimo both seem to know all there is to know about Milan and its social mores, and how to attract yet more people to come, and stay even longer. They filled me in pretty quickly, and they insisted that at least one of us try a local risotto, saffron flavoured and made with Carnaroli rice. Now this, it seems, is very special, certified by the national cooperative for selected seeds, ENSE, and the best Carnaroli is from the small Riserva San Massimo, a mere 100 hectares in all. There are two specialists, Cristiano Guizzardi and Dino Massignani, whose sole job is, it seems, to perfect the growing of this rice. 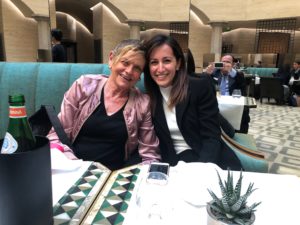 Ilaria after the iPhone mix-up was unravelled

So lunch was fascinating. I heard how at each Milan Fashion Week Gucci does a complete buy-out of the entire hotel, to put up their special guests and to use, too, for business entertaining.  I heard how, for Italian millennials, there is no such word as No, they want anything and everything, exactly when they want it, and how all ages have switched from traditional martinis to mixologists’ specials.  And then, oh dear, lunch went belly-up.  My iPhone suddenly switched to Italian, and it wanted a six-digit password (mine is four). Ilaria brilliantly got the hotel’s IT specialist in two minutes – always the sign of a really good hotel – but he was flummoxed.  Only when I got up to go did both Ilaria and I realised our stupid mistake.  I had earlier been trying to use HER iPhone. No wonder we both collapsed in gigg 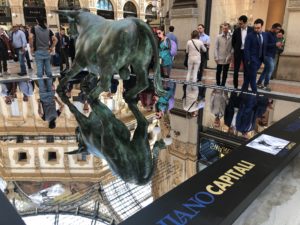 And then I returned to the Galleria.  Before lunch I had been waiting for the unveiling of a shroud-covered statue (see the image above).  I was fascinated by the faces of people around – see the video below. Athough the stated unveiling time of 1 p.m. had come and gone, nothing had happened. After the iPhone mx-up, or unravelling of the mix-up, I went back to the Galleria and there was a splendid lifesize bull. Displayed thanks to the magazine Milanofinanza.it, this was Milano Capitali, by Francesco Messina (he saw it as a positive symbol of financial power).

It is also a reminder that for some tourists it brings good luck to spin round on the Turin bull in the mosaic floor in the centre of the Galleria floor. WATCH A MILANAISE CROWD GATHERING JUST BECAUSE IT IS GATHERING – AND MOST PEOPLE HAVE NO IDEA WHY