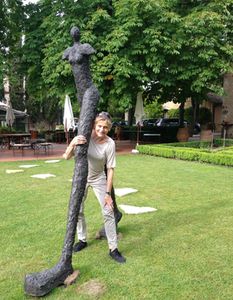 A Nathalie Decoster greets you in the five-acre garden

Arrive at some luxury hotels and you feel immediately at home – and this was the case with Hostellerie l’Abbaye de la Celle, tucked in between Roc de Candélon and the Loube mountains in Var, southern France. There in the gorgeous five-acre gardens, nestling up to the centuries-old hotel and, at right angles to it, the convent that is over a millennium old, there is a Nathalie Decoster.  Just as at The Grove, near Heathrow, and at Mandarin Oriental Paris, to be greeted by one of her sculptures immediately makes the gal smile. Here they are beautifully set among cedar, chestnut, cherry trees, blackcurrant and gooseberry bushes, and in the three-floor main house. Through December 2013, stay here and have a sculpting lesson with a local artist. 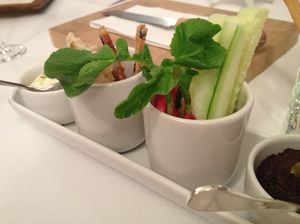 I had, like all visitors, been drawn by the magnetism of Alain Ducasse, whose pull is such that he is supervising Monte Carlo SBM’s 150th anniversary picnic, in front of the casino there, on the weekend of July 5-7, 2013 (Rod Stewart will sing at some point).  Here, he leases the Hostellerie from the department, and who oversees the food (his lure is such that tonight some Japanese have been driven over from Marseille, more than an hour away, for dinner). The Hostellerie’s chef, Benoît Witz, has been here since the place was Ducassed, in 1999, and his food is magical. Every one of the 40 seats, in two rooms, was taken. Choose the paneled Diane de Calluire room, or the lighter Alsacie de Montpellier room. Our table was set with pale grey linens, white ceramics, a small Nathalie Decoster sculpture, and a notepad and pencil.  I loved the crudités to start, goat cheese, tapenade, vegetable and bread sticks. 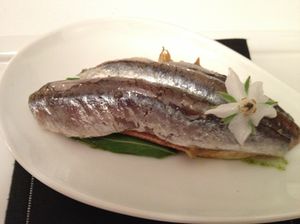 .. as do fresh anchovies, as amuse

An amuse came, fresh anchovies on oil-smothered baguette.  The menu, stuck either side of a wooden board, changes daily, depending on what Mr Witz and his crew can find. Tonight there is a five-course menu of the season, and a six-course tasting menu, both of which have, as last but one, lavish cheese boards of local goat cheeses and a big bowl of salad.  This is actually very generous, all round. ‘Bread’ here is two half-loaves, one white and one brown, fresh-baked, served on a wood board with carving knife and napkin to slice as you want.  The olive oil is Ligurian. 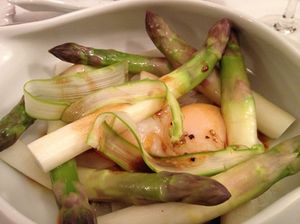 Asparagus, whole and in paper-thin slivers

My man has asparagus, Ducasse style with a poached egg.  I have a Greek salad, Ducasse style, with vanilla, and lumps of fresh goat cheese.  I go on to hake, which comes with richest chicken jus for extra flavour, and a little glass pot of potatoes smashed with a fork, and blended with olive oil (at this rate of olive oil consumption, my joints will operate with more fluidity than Fernando Alonso’s Ferrari). Also, if I stay longer in the region my consumption of rosé could rise far above its year-round norm, which is zero. There are no fewer than 29 rosés on the list here.  I start with a Ch Barbeiranne, richer in colour, and move on to the paler Ch des Annibals’ charmingly-named Suivez Moi Jeune Homme. 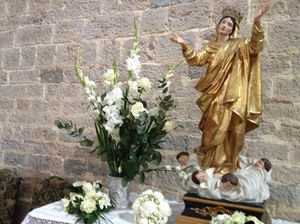 A statue in the adjacent working church

I think back to the nuns who had populated what was a Benedictine convent from the 12th century until closed by Cardinal Mazarin in the 1660s.  Many of them were the unmarried daughters of aristocrats who came with substantial dowries, and a desire to party.  There are rumours that despite the time they spent praying in the still-working convent church that is literally attached to the hotel they, well, entertained in the very building that is now Hostellerie l’Abbaye de la Celle. 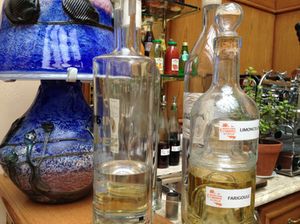 Digestifs on the bar, next to a mushroom-shaped glass lamp

They may have eaten well, but not a patch on what Benoît Witz and his mentor, Alain Ducasse, produce. And they would not have had such an array of these local rosés, nor access to the designer liquors and digestifs  in the all-purpose bar-lounge in the oak-floored conservatory Veranda that acts as lobby lounge at this luxury hotel (the mushroom shaped glass lamp is by Jean-Claude Novaro, from nearby Biot, though he is spending an increasing amount of time in Qatar apparently….)