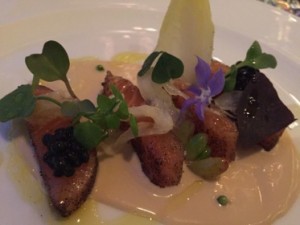 The history of food can be approached in many ways, says the gal. A decade or more ago, in St Helena CA, Michael Chiarello produced a barbarians‘ banquet for a group of foodies who included former head of InterContinental Hotels Hans Sternik, and wine producers Belle and Barney Rhodes (one of two people in the world to be accorded an A+ wine-tasting palate) and a supposed connoisseur who spent most of the evening talking about the finer points of olive oil. The barbarian diet proved rather dull. Honestly more enjoyable is DINNER, the regular, packed-out twice a day restaurant overseen by Heston Blumenthal at the always-innovative luxury Mandarin Oriental London hotel. Book far ahead, lovers of the best: even if you can only get a table at 6.30 p.m., grab it. Faultless service and fascinating food make it utterly memorable. 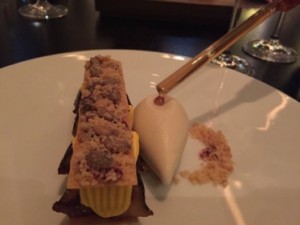 That night I was ready to go backward in time. The simple black-writing-on-a-two-fold card gives dish descriptions and dates on the front, and provenance on the back. I started with three one-bite morsels of Earl Grey-cured salmon, with lemon salad, on a Gentleman’s Relish sauce, with wood sorrel and smoked roe. The Gentleman’s Relish brought back so many memories: it came in small round china pots with a black and white label (Gentleman’s Relish, also known as Patum Peperium, is an anchovy paste first blended – minimum 60% anchovies, plus butter, herbs and spices – by John Osborn in 1828). This recipe, however, is dated 1730, when it appeared in a work called The Complete Practical Cook, by Charles Carter. How on earth did Heston Blumenthal come up with all these old dishes, and will they also appear at the DINNER restaurant he is opening at the end of October at the Crown complex in Melbourne. 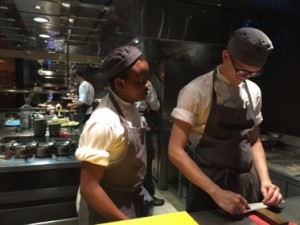 Everything is prepared in front of diners, in the glass-walled kitchen

So, back we go. My main course appeared in the 1670 publication, The Queen Like Closet or Rich Cabinet, by a schoolmaster’s wife Hannah Woolley – she began writing after she was widowed, with six children. My dish is powdered duck breast, topped with smoked confit of fennel, and umbles, the contemporary name of any bits of offal, in this case duck heart. By the side was a dollop of smoked beetroot purée. We were drinking, by the way, Castellare di Castellina 2012, Chianti Classico Riserva, which went so well with the clean tastes of each dish. It was a noticeably clean meal, in every respect. Wood tables are uncluttered, except for white china and linen napkins, nothing extraneous, and servers, in soft grey and white, do not have a single hair out of place.   Even the kitchen staff, in whites with dark grey caps, look pristine (love being able to see them, through big glass walls). 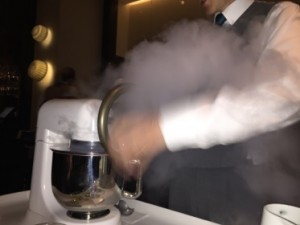 Continuing back through history, my dessert was roast figs and saffron, apparently, according to The Forme of Cury The Master Cooks of King Richard II, popular in the year 1390: this was because three years earlier, the King and his uncle, John of Gaunt, Duke of Lancaster, had hosted a feast and turned to French chefs, including recipes passed down from Guillaume Tirel, known as Taillevent, who had been personal chef to Edward III, King Richard’s grandfather I had saffron yoghurt and fig-leaf icecreams, and damson jam, and a pipette of pumpkin seed oil was piped over. And then, dear reader, the sense of going back in time was shattered. A head waiter appeared with a bowl of just-made crème anglaise and plenty of nitrogen. This he sprayed as shown, on to the crème anglaise, and wound the handle until it turned into the most exquisite ice cream, which he scooped into cones. Chocolate or raspberry toppings? Really, this is a luxury hotel that is always full of fun, and innovative style.