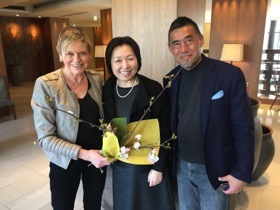 Hiroko Noguchi and Sam Ohta, with a welcome nosegay

It was a lovely Sunday and Sam Ohta, he who is the king, and king-maker, of Japan’s hotels, suggested a trip to Hakone. It was less than an hour by train from Tokyo Station, and at Odawara we were met by Hiroko Noguchi, who drove us the last half hour up to a height of 2,400 ft above sea level, to Hakone. There, she runs the lush wooded area’s only international luxury hotel, the 80-room Hyatt Regency Hakone Resort & Spa. It is owned, says the gal, by the Hong Kong-based SHKP company, since one of its directors honeymooned in Hakone some years ago. 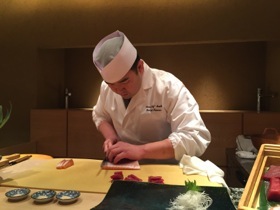 Hiroko-san had arranged an amazing lunch, a presentation of made-in-front-of-us sashimi and tempura, and then she showed us around. There are six dog-friendly rooms, with separate canine shower rooms and balcony areas where the beloved pet can safely be left while you go to dinner, or do whatever. I loved the onsen spa area (only saw the female one but apparently they are identical). A small booklet shows how to onsen, which apparently is good for everything from arthritis and burns through to feminine disorders. Wear the yukata and tanzen provided and take off footwear at the entrance. Inside, take all your clothes off (swimsuits not allowed). First rinse with tap water, using soap if needed. soak in tub – no soap allowed. Get out and wash body. Repeat. Dry, dress, and drink plenty of water. 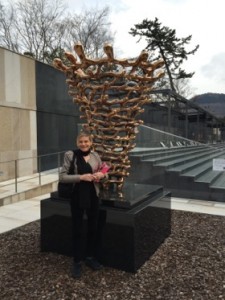 Outside the Okada Museum (no photos allowed within)

Next on our Sunday day out was a trip to the Okada Museum, which the pachinko tycoon who has been at loggerheads with his former casino partner Steve Wynn appears to have built solely as a house for his amazing collections of Oriental art. Okada Kazuo – whose restaurants include MEGUs – used to collect Renoirs and things like that, said my guide Shogo Izaki, who used to run the museum. It is totally awe-inspiring, with five floors of endless-black background for strategically lit pieces of pottery and scrolls. I must admit I was particularly fascinated by the Shunga room – no-one under 18 admitted. For those who do not know what Shunga is, look it up on google, and then head for Hakone. 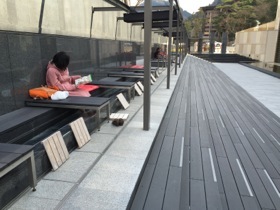 After touring the Museum, many rest their feet in hot onsen water

No photographs are allowed in the Museum – you have to hand your smartphones in, and all baggage is x-rayed. Once outside, and reunited with my iPhone, I smiled at the onsen footbath. Okada-san wants you to enjoy his Museum to such a degree that you feet are exhausted. Recover, therefore, by soaking them in a warming footbath… and with that final impression, it was back to the train station and the next luxury hotel.