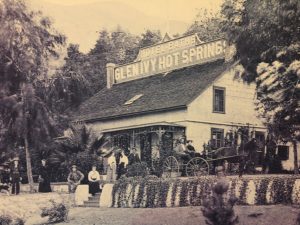 Sometimes the gal needs a change from luxury hotels and Glen Ivy Hot Springs in the Temescal Valley, two hours’ drive south-south-east of Los Angeles, provided a unique experience.  Soon, perhaps in a couple of years, the 14-acre estate will indeed have two hotels, one undoubtedly luxury and the other more basic.  For now, guests are hosted, and quite superbly, in an old house among buildings on a wellness complex that goes back to 1860. Glen Ivy Hot Springs is owned and managed by GOCO Hospitality, whose visionary leader, Ingo Schweder, was supposed to be hosting but he was summoned by MbS, the Saudi Crown Prince, for whom he is doing wellness at at least one of MbS’ ever-increasing number of planned resorts in Saudi Arabia. 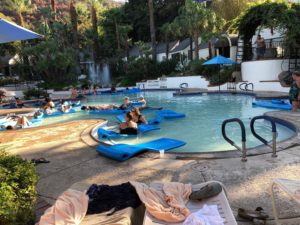 Never mind.  Clive McNish, a fine English man with years of experience at Four Seasons and elsewhere, is GM here and he looked after me.  In a nutshell, this is the highest-grossing day spa in the whole of the USA.  Adults, predominantly female, drive for up to five hours to get here, often arriving by 7.30 a.m. Why so early? The facility opens at nine but at 8.30 a.m. they start letting you in, to pay $50 Mondays to Fridays, $70 at weekends. At peak times, they frequently have to close the doors at 8.50, that is to say ten minutes before opening, as maximum capacity has been reached. (The locker rooms, with 700 lockers for ladies, are a sight to behold.)  But so much is mouth-open “can’t believe it”.  Clothing, at least minimal, is compulsory, even in the unisex basement grotto, which is $25 extra. 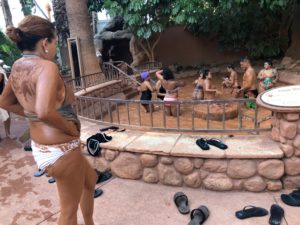 There are 19 above-ground outdoor pools, and a lazy river is planned for phase two. One popular feature is Club Mud. For no extra cost you slather yourself and your mates in soft and fresh mud and cavort in a couple of pools reminiscent of hippo pools at a zoo – the patrons, by the way, range in size from double-zero to, well, bigger than you can imagine. The really good clothing store here claims to have the biggest range of all-sizes swimwear in the country. Yes, on top of the basic entry you will undoubtedly, via the telephone number you listed on entry, pay extra for clothing, and for super smoothies, and tacos, and, perhaps, a spa treatment– remember, this is GOCO’s speciality. Try a Comfort Zone facial (the spa also works with COOLA, Farmhouse Fresh, Jane Iredale, NuFace and SpaRitual). 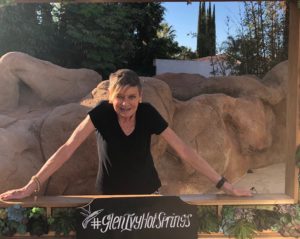 In all, says Clive McNish, they typically have 800 customers every weekend, slightly fewer other days, and then another 400 come for the evening, twilight session. After you have mudded-up, and been massaged, and rested in your (paid-for) cabana, there are several dinner-suitable meal venues, with all food cooked here on site, and a commendably good wine list.  Some things are free. There is no charge for towels, which results in 7,000 towels, fortunately mud-coloured, being sent to an outside laundry every day.  And there is no charge for selfies, as shown here. When I return, I am sure at least one of the planned luxury hotels will have been started, which will mean expanding into the adjacent 68 acres that GOCO also owns. Like A Town Like Alice, expect this project to grow, and grow…. SEE WHERE HONOURED GOCO GUESTS STAY UNTIL THE TWO PLANNED RESORTS ARE READY