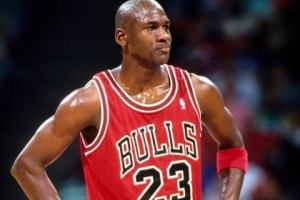 What do you get when you pair Michael Jordan – and Starbuck’s – with a highly historical luxury hotel, asks the gal? At InterContinental Chicago you get a friendly place with lots of emotional depth run by people with a tremendous amount of pride. The concierge remembers you from two years ago, a bellman says he has been here 20 years and look at the hotel now! He turns towards front desk. Behind this is a real-time video showing scenes of Chicago, its river, at this time of year dotted with full pleasure cruisers and plucky kayakers weaving in and out, and scenes of the rooftops of such famous edifices as the 1919-vintage William Wrigley Jr Building, the Equitable Building (1965), the Standard Oil Building (1973) and the 1926 Jewelers Building, which at that time had an auto elevator and indoor parking to protect jewellers’ jewels from being stolen by a Chicago gang. 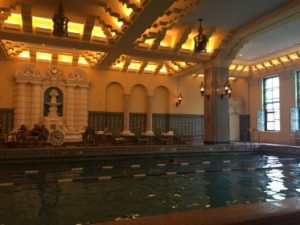 I am in one of the most historic of all, however, the two-tower 1929-vintage, built as the Medinah Athletic Club, for the members of the 3,500-strong Shriners Organization. The original swimming pool still remains, as do many of the public rooms embellished with whole walls of Burne-Jones-type characters. In the past the Club had a miniature golf course and a shooting range, plus a two-floor boxing arena. Until now the 792 bedrooms were also reminders of the past, with deep sandalwood and rust and brown the dominating colours. But now a miracle has taken place (and yes, this is the only hotel with its main entrance directly on Chicago‘s worldwide famous ‘Magnificent Mile‘, Michigan Avenue). The design duo Simeone Deary, who specialise in residential, have used as much palest and darker soft grey, and white, as they could muster. 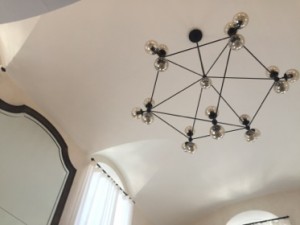 Take room 3550, a 1,600 sq ft masterpiece, with a curving, 17-step white staircase taking you up from the living area to the upper floor bedroom. From there, look back down into the two-floor-high salon, its full-height curved topped windows covered in floating white drapes – I expect Isadora Duncan to start dancing any moment, or perhaps it would be Coco Chanel (there is a seriously-heavy pale pink book on her Vocabulary of Style, by Gautier, which I misread at first as Gaultier, Jean Paul – it is in fact by Gautier, Jérôme). There is, thoughtfully, lots of serious reading in the suite, just in case I have time on my hands. Running up and down my private stairs, and looking around, and up at the ceiling’s chandelier, makes me realise what geniuses the design team are. And another genius was whoever brought in Michael Jordan, or at least his restaurant and sports bar. 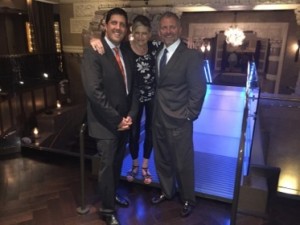 Open lunch and dinner, Michael Jordan competes with and beats the dozens of other steakhouses around, and out-of-town visitors love it, especially when they can get table 23, named for his number, and yes, he might just turn up. A big party of Japanese, taking lots of photos, sits right near us, the ‘us’ being Manager Markus Krebs, and Bill Bennett, the sales and marketing supremo. The menu, by the way, is great for visitors’ English (‘Steakmanship: our passion and commitment is to elevate the food and dining experience to the Michael Jordan level. It’s in everything we do, and it’s only here’). Of course I had to have an MJ’s Delmonico, a dry-aged 45 days USDA prime ribeye, with side of creamed spinach, eaten with a Michael Jordan steak knife. At this stage, we were drinking Bench Sonoma Coast Pinot Noir 2013 but it is rumoured that the big man, a known oenophile, might be producing his own wine….. Yes, this is a luxury hotel that thinks about its guests. You can sign for your steak, and also for your latte or long black in Starbucks, and if that is not enough signing, go to one of Eno wine and cheese bar’s Enovisty classes (the next, on August 23rd, 2015, features tastings of wines from Argentina, Chile and Uruguay).