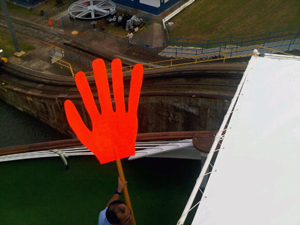 Sailing on N21G north through the Panama Canal was one of the gal’s all-time highlights of her eventful life – so FAR.  What, you might say, surely the ship is that super-luxury floating hotel, the Silver Cloud? Right. But when 40 ships a day sail through, from the Atlantic to the Pacific or vice versa, they are given an identification. Silver Cloud, travelling northwest from Pacific to Atlantic, was N21G.

N21G was anchored outside the Canal Zone from midnight. A medical emergency on board had meant full-steam ahead, all of 18 knots, to get there so the poor woman could be taken off, and to hospital. The ship then entered the Canal proper at 0650 and left it at 1645.  In between it was nonstop education. 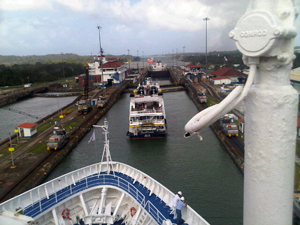 Every ship is actually under the command of a Panamanian pilot captain, and at times there were a dozen local workers onboard, manning the winches.  The double entries, at Balboa (Pacific) and Colón (Atlantic) are run by Hutchinson, out of Hong Kong, but the overall command, since December 31st, 1999, has been by ACP, the Panama Canal Authority on behalf of the Panamanian Government.

Why the canal?  Well, to sail from San Francisco to New York round Cape Horn is a total of 14,000 miles. Thanks to the Panama Canal, the distance is cut to 5,900 miles.

It usually takes a minimum of eight hours to go through, and anyone can watch the ships via www.pancanal.com   From the Balboa end, you first sail in past a long mole (breakwater), and a giant-sized pile of rubble of bright scarlet, yellow and other bold-coloured shapes.  This is not a mess but an artistic mass, ha ha.  It is Frank Gehry’s architectural creation, the Panama Biodiversity Museum that the government commissioned, but has so far not yet opened. 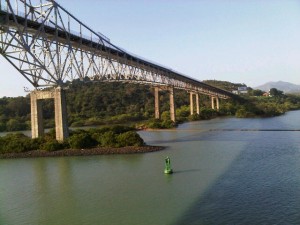 Bridge of the Americas, across the canal

Spanning the Canal are two mighty bridges, the Bridge of the Americas, and then the stunning 2003 Centennial Bridge, rather like the Lantau Bridge leading to Hong Kong International Airport.   There are three sets of locks, taking you up a total of 85 feet above sealevel and then down again.  When the concept of the canal was first mooted, the French, who had successfully ‘done’ Suez and thus thought they could ‘do’ Panama, were, under Ferdinand de Lesseps, planning to cut right down to water level.

But the French retreated, having lost just under 22,000 lives, mainly to malaria and yellow fever, and the Americans took on the project. President (Teddy) Roosevelt asked railroad genius John Stevens to take over, and he redesigned the canal with locks.  The Prez even came to inspect the work, in 1906 – the first-ever journey overseas by a sitting president.

By 1906 the chaos that had been French mud and disease was getting into some kind of order, thanks to Stevens and another marvellous American, a military doctor Col William Gorgas, who was fighting, and conquering, both malaria and yellow fever (he was immune to that himself as he had had it when nursing the relation of his commanding officer back in Texas – she was about to die, with her grave already dug, but they both survived, got close to each other when convalescing and decided to marry). 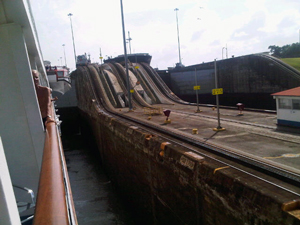 Toytown trains run on tracks either side of the canals

The 48-mile canal finally opened August 15th, 1914, and it is hoped that additional locks to take bigger ships will open on its centenary. As it is now, there are three pairs of parallel double locks, each with two chambers that are 1,000 feet in length by 110 feet wide, and all have two pairs of the world’s strongest lock gates. Ships are guided through by little Toy Town trains – made in Japan – two at the front of your craft and two at the back.

We approached the first lock, Miraflores, and despite detailed thoughtfulness from John Stevens’ teams and today’s technology, first connection with our four trains was via a small row boat.  Two men row out, giving a string to their colleagues onboard the ship and, string to rope, rope to wire, we are thus attached to one train, and then another.

At Miraflores a three-tier viewing station was jam-packed with waving crowds, which we also found at the last (Gatun) lock – the middle lock, Pedro Miguel, is too far from either Baboa or Colon.  In between Miraflores and Pedro Miguel you sail nine miles through the Culebra Cut, piercing through what was the continental divine. Between Pedro Miguel and Gatun lock you sail 25 miles over Gatun Lake, the world’s largest man-made lake…. The total cost of all this was some 700 million dollars. 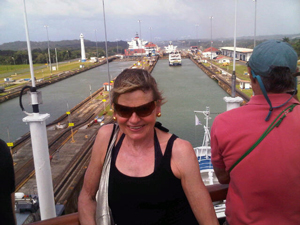 A lot of time is spent on deck, watching the nonstop action (mega-container ships in distant lower lock chambers look like apartment blocks)

It costs one helluva lot to go through, depending on a ship’s tonnage, passenger numbers and various other things. A big cruise ship can be billed for about $400,000 – minimum cost is $500, which it would cost even if you swam through.

The celebrated traveller Richard Halliburton did that in 1928, having got permission to swim through the locks, and it was only 36 cents.  Poor guy, he was later to be presumed dead when, at only 39, he tried sailing a Chinese junk from Hong Kong to San Francisco for the Golden Gate International Exposition, and never arrived…

Going through the Panama Canal is like a PhD in engineering in one quick day.  Certainly a change from the world of luxury hotels.