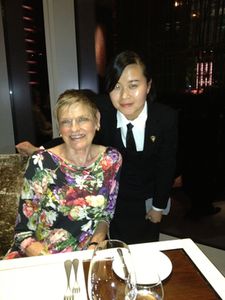 Female sommeliers are often encountered in the west but to meet up with the Chinese Sommeliers’ Champion 2012 – and the Best Chinese Sommelier for French Wines 2011 – Ying Guo, is a real treat.  She is head sommelier at the six-month old luxury hotel that is Four Seasons Hotel Shanghai at Pudong and, she tells the gal in faultless English, she was destined to do this.  Her parents are in the drinks business, and once introduced to it, she quickly knew wine, particularly fine French, to be her passion. 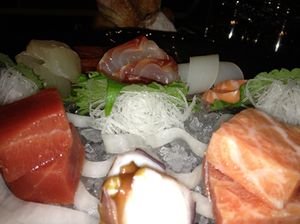 Sashimi plate, by a Japanese

It is fortunate that her (German) boss, Rainer Stampfer, believes in only the best. In the bedrooms, he has commissioned exclusive Italian toiletries, from Villa Lorenzo Villoresi, in six-sided red rubber bottles with silver stoppers.  He has called his main restaurant Camelia, not only for memories of Chanel but because a quarter of Chinese cook, at home, with camelia oil: here he has brought in both a Japanese master chef, Usao Takizawa, and a French chef, Benjamin Brial. There are therefore, as you might expect, two Hermès-look leather-covered menus, turquoise Japanese and orange French. 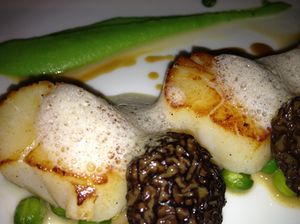 Cod, by a Frenchman

We start with a bowl of sashimi. We go on to Takizawa-san style rolled maki and fish-on-top nigiri sushi, and then I proceed to a Parisian version of black cod. Ying Guo, faced with an easily surmountable challenge of red with fish, chooses Marsannay 2009 Les Longeroies Olivier Decelle.  We are, as you would imagine, drinking out of Riedel glass, and eating off Bernardaud plates.  The cutlery, which looks as if it has lost all its shine, is an unusual matt Christofle. There is something about these hotel guys in Shanghai.  It is not so much that they try to outdo each other, more that they cannot lose face by being left behind. 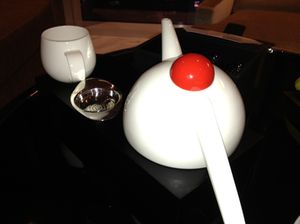 Teapot, chosen by a German with a sense of humour

Up in my room I find a 12-inch wide pair of red lips, rather like a pillow but actually a top-only shelf.  The lips are surrounded by standing lipsticks, clear plastic outsides, real chocolate (milk or dark) inside.  I have the tea presentation that is the norm when arriving at any good hotel anywhere in China.  Here the teapot has a clown’s nose as its lid’s knob.  I wonder if has been borrowed from the Power Station of Art, the newish gallery of modern art that is a conversion of Shanghai’s 1897 Nanshi Power Plant (it is currently, through end July 2013, showing an Andy Warhol exhibition). 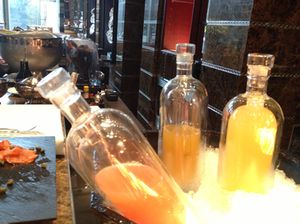 I do wonder sometimes if my life story is becoming boring – but I rely on my critics to let me know if performance is not up to par. I return to a final workout in the gym, wall sculptures and all, and then, for variety, run along the road outside.  This is easy as the pavement sidewalk is wide and meticulously clean, but it is also frustrating as traffic lights do not allow plenty of pedestrian time.  Solution, gal? Run round and round a block rather than trying to cross roads.  You also know, this way, that you will not get lost. 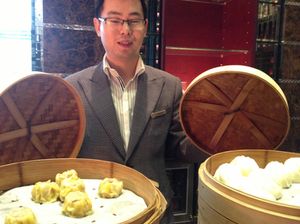 Back in time for breakfast, I consider Chinese specialties, say shao mai dim sum or vegetable buns, or deep-fried dough sticks and vegetable spring rolls. I could try congee, and/or fried rice and ‘scalding’ vegetables.  Sorry, even in this luxury hotel I chicken out, order wholegrain toast, to eat with French jam, French butter.