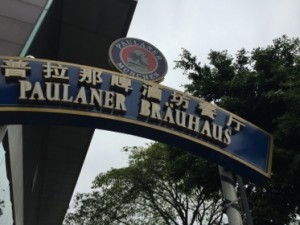 Paulaner Brauhaus is one of the biggest German success stories in China, says the gal. The first working micro-brewery-in-a-restaurant appeared when Hotel Beijing Lufthansa Center opened in October 1992, and it helped put that luxury hotel on Beijing’s drinking, and eating, map. The Paulaner Brauhaus in Hotel Kempinski Chengdu has similarly been a feature since the hotel opened in May 2004. It still has a prominent entrance at Tongfeng Lane, behind the stately 20-floor hotel. 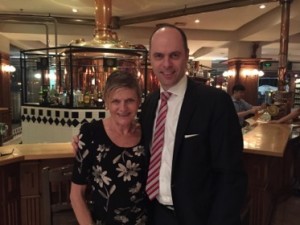 The German GM of the hotel, Axel Bethke from Heidelburg, not surprisingly loves the Paulaner Brauhaus concept, and he showed me round. This one has 240 interior seats, and a live music section where an Indonesian group belts out in competition to the huge television screens, set fortunately fairly high up but tonight providing non-stop soccer from wherever. There is non-stop entertainment, actually, including looking at the highly-polished tanks and vats that the beer-master, another German, works three times a week. 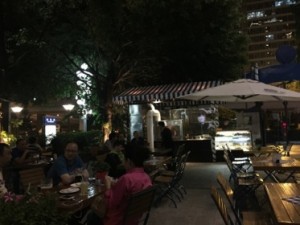 As I now know, Chengdu people love eating outside, even in winter, which is fortunately quite mild here. The Paulaner Brauhaus has a further 150 seats outside, always popular not only with locals but with expats (and they are not all German). Tonight, Monday, is Student Night, choose the menu’s signature Brauhaus mixed-meats platter, meant for sharing, and you get two litres, sic, of beer free. Other marketing specials include a brewing demonstration and drinking competition on Wednesdays, and, the following night, ladies are offered a single free glass of rose-hued beer. 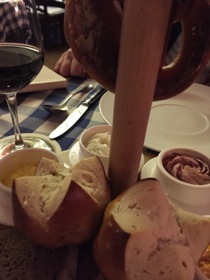 Whatever and whenever, your meal starts with the signature breads, in the form of a vertical wooden stand from which hang hot pretzels.

We are sitting inside, on a table covered in a blue and white checked cloth and, typically, cutlery stands upright in a ceramic beer mug. Atypically, we are both drinking wine, a Las Condes Merlot 2014. 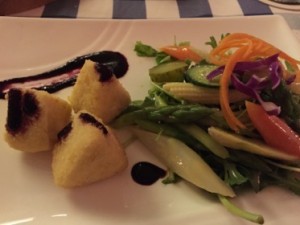 Paulaner, which is now co-owned by Heineken and the family of the late, art-loving Stefan Schörghuber, has been going since it was founded in Munich in 1634. I bet in those days they would not have drunk it with such foods as tonight’s asparagus specials, say a mixed salad with green and white asparagus, or a schnitzel with white asparagus (it comes from the neighbouring Yunnan province). I have six Nuremberg sausages, which are sitting on a bed of sauerkraut. Those dining outside can also choose proteins, and vegetables, which are put on a tray, threaded on skewers and barbequed. 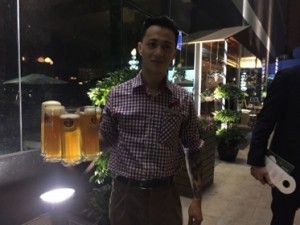 Servers here are in Bavarian dress. Chic young local ladies look extremely neat in short dirndls, as do the guys, in checked shirts and lederhosen. Regular guests have named ceramic beer mugs, stored in glass fronted-cabinets – others are served their chosen beer in big glass mugs, carried in Oktoberfest style by the servers. Out of sight, and in between serving, these keen young people may be WeChatting in praise of this well-established luxury hotel. The Boss (Axel Bethke) holds a monthly competition for the most online postings about the hotel, say to win a free weekend at Sanya. Now THAT is original.