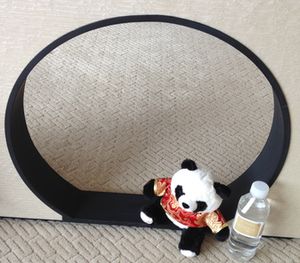 A sculpture? No, the end of a desk

Sometimes something is so original you wonder why it has not been thought of before. At one of the Chinese capital’s newest luxury hotels, Conrad Beijing, ends of desks have been made into statements. The gal put a water bottle, and the little damask-clad panda that sat on the bed, into the photo to give a sense of scale. Another notable feature is that everything in the room is what designers LTW call ‘beige’ – it actually looks more exciting than beige, a depressing term implying dowdy, down-trodden, old-fashioned.  In fact, there is nothing that is NOT exciting about this hotel.  It is a creation of the appropriately-named MAD Architects, whose current projects include three visions for Beijing: changing Tiananmen Square into a park with a theatre, inserting futurist bubbles with sanitary facilities into traditional hutongs, and installing a floating upper layer, complete with parks and lakes, above the city’s CBD central business district.  These are surely among the world’s most creative architects. 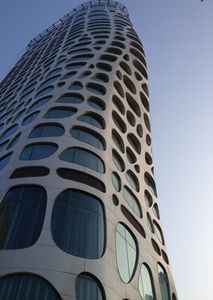 Section of the exterior

The building, an open V-shape, soars upward with a slight twist, up through 29 floors. The metal of the main shape is, of course, pierced with windows but these are not your standard, square or rectangular windows.  Every window appears to be a unique shape – the only uniformity is a certain J.R.R.Tolkien association.  If Hobbit-land was to be brought to the 21st century, this is where Frodo and his friends would live were they to move to a city centre.  Look again and it is obvious that bedrooms are going to be enlivened by art-shaped windows.  Sure enough room 2710, a junior suite at the apex of the V-shape, might be all beige but as well as its desk-end it also has wow from the window shapes.  They seem to wrap around the entire 860 sq ft of personal space and, being me, I naturally pulled back the electronic curtains (beige, of course) immediately. Chinese may like to feel claustrophobic but it is my norm when going into any bedroom, that the first thing to do is to open the blinds. 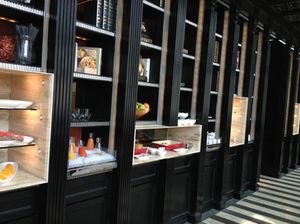 There is more sensationalism in public places.  The all day restaurant, Chapter, is related only, in my experience, to Elena in Four Seasons Hotel Buenos Aires, where designers EDG installed an upper floor with a prominent wrought-iron spiral staircase.  Here, designers Spin have been even more extravagant – a wrought-iron spiral staircase winds up, 30 glass-based steps in all, up to a mezzanine level and on again to the upper floor.  The long wall of what is essentially a two-storey height is completely filled, top to bottom, with genuine wood library shelves.  At each of the three levels you can browse, borrow, read, even swap books. Down at the ground floor, the waist-height shelves are used, at breakfast, to display the buffet items.  Brilliant.  One more stroke of genius: at the top level of the library, you are next to what is a cantilevered area of another restaurant, Grill 29 (not for the number of floors but for the hotel’s address, 29 North Dongsanhuan Road). 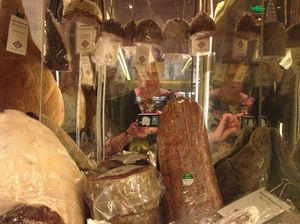 Grill 29 typifies the Conrad culture of contemporary, smart luxury.  In this space Spin has balanced the light airiness of the cantilevered part with a dark inner-sanctum that is probably much beloved by Chinese.  Chef Ivan Luigi Fargnoli was raving about his just-arrived burrata, so that had to be on the list, with paper-thin slices of San Daniele ham sliced on his pride-and-joy Swedlinghaus (why are slicing machines always blood red?). He showed me his ham room, which houses so many varieties it looked like a zoo. The printed menu’s cold cuts section includes such delicacies as horse bresaola, ostrich and wild boar salami, with or without truffles.  He does a jolly good job on the burger side, by the way: fresh and ground braised beef with foie gras and potato, all made into a patty and popped into a bun, may sound filling but actually, bread aside, it was all of two mouthfuls, and extremely tasty. 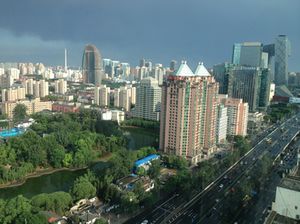 Looking down, at Tuanjie Lake Park

Like many cities, Beijing only reveals many of its natural secrets from up above.  From my Hobbit-home, I look down, across North Dongsanhuan Road, to a lovely park, Tuanjie – united – Lake Park, hidden from the street.  This actually, it appears, is not natural at all, but all man-made.  In the morning, as light dawns, I head down to ground level, and cross the main thoroughfare by the over-bridge that the city authorities thoughtfully provide every couple of hundred yards over the most important roads.  Outside a Chinese temple-like gate a sign says Free Entrance, in English, so in I go. 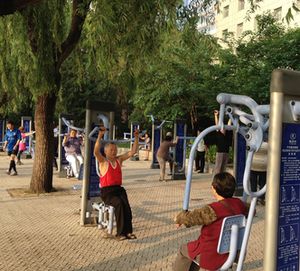 Of the hundreds already there at that hour – average age 70, average fitness way way above what would be the norm in the west for that age – and all but me were locals.  I ran around the lake twice and joined in the paracourse exercises, when I could get on one of the machines (there must have been 40, and all busy). And then it was back to my luxury hotel, to be faced with the dilemma of which shampoo to use, blue-packaged Aromatherapy Associates, or the garish dayglo green and orange that is surprisingly Shanghai Tang, or the bird-embellished organic Tara Smith (apparently she is a London hairdresser).  Nothing beige about this-all, gal.  And then it was time for breakfast, yippee.