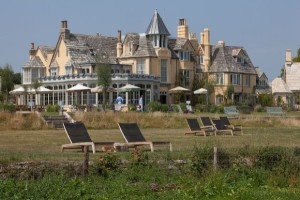 Pig on the Beach in daylight

Change of scenery for the gal, an entr’acte, as it were, between luxury hotels in big-cities of the world. Let us return to Studland, one of the most beautiful south-coast areas of England. Here is an old house, built in 1825 as a summer home for the Bankes family, who lived the rest of the year all of 30 miles away, at Kingston Lacy (now a National Trust treasure, open to the public). The Bankes’ summer hang-out later became the Manor House Hotel and then the same National Trust, which owns the freehold of the site, gave it to brilliant hotelier Robin Hutson and his colleagues to convert into a ‘Pig’ (and within a couple of months it was awarded ‘best hotel in UK’). Those who have not come across England’s shabby-chic Pig hotels have a treat in store, and, honestly, a second visit here was even better than the first. But since we arrived at dusk, the first priority was to rush down to the beach, five minutes away, where a small café was still open. I looked out to the English Channel, and darkness. 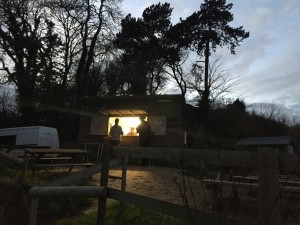 Night fell on the beach, a small café still open

And then, as night had really fallen, we, like everyone else in the always-full hotel, gathered in one of the bars, the main bar, the Residents’ Lounge or the Snug – oh what an English term. The bar has an eclectic array of drinks, a big log fire and, like all the other public areas, an assortment of old leather sofas and easy chairs that just seem to say collapse on me. Drinks came with ordered platters, on wood trays. Piggy Bits include the most divine saddleback crackling you can imagine, with apple sauce to dip. Fishy Bits includes mussels that our party nearly fell to blows over. We moved next door, to the restaurant that swells out into the conservatory attached to the main house. Yes, the floor planks are unpolished, as are the wood tables, with growing plants instead of flowers. It is all commendably sustainable but also fun, and the food is frankly superb. A walled-garden salad was just that, greens from the adjacent garden, a wall around it – and as well as plants the garden has ‘grown’ a bothy, a thatched, circular house that is a luxury suite for two. 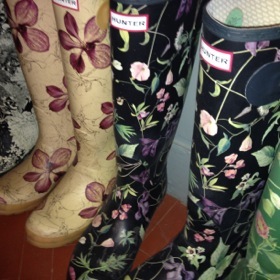 Array of boots to borrow

It is logistically easier being in the main house, especially in winter. In summer, the bothy or one of the shepherd’s huts must be divine. All the 33 rooms have bakelite easy-switch lights, and Roberts radios, and toilets with long-long chains to pull. The old-fashioned-look shower controls are so easy it makes me feel, once again, that modern designs are often too complicated. Most showers are fine for their designers, and a hotel’s owner and operators, but not for here-today, gone-tomorrow consumers. Back to the dinner-table, gal. It had to be a Bath chap. This is one gigantic piece of meat, covered in magnificent crackling, yes more crackling. The first mention of a Bath chap was in a daily paper called Morning Chronicle, April 26th, 1831.   Goodness only knows what those elegant ladies in their crinolines did with this hunk of meat, although there is a lot of bone inside (for the record, a Bath chap is the lower portion of a long-jawed pig’s cheeks, pickled in brine for at least two weeks, soaked in fresh water for 24 hours then boiled for over three hours before roasting). 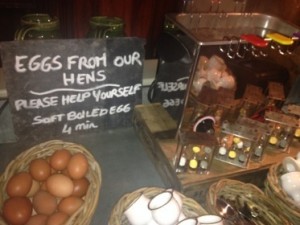 Boil your own eggs, to perfection

Anyway, it is delicious – especially with the hotel’s M. Chapoutier Rhône wines. I go upstairs to bed, past an array of Wellington boots – all Hunter brand, best there is – and sleep like a log. Breakfast at any Pig is total luxury, what every hotel should offer. The buffet table is full of big bowls of healthy cereals and open yoghurt and fruit compotes. There is do it yourself, boil your own eggs (Burford Browns or Cotswolds Blue, from the hens in a big grassy compound between the hotel and the sea). Turn-upside-down timers offer three, four or five minutes. I have two, four-minute Burford Browns, put in some olive oil, drink excellent coffee from the white enamel plunger and say to myself, this is what luxury is today. I want to come back for more.