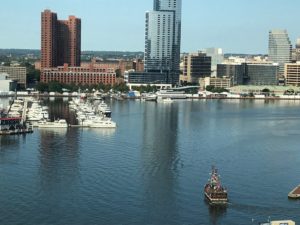 Some cities just get better and better, and Baltimore certainly fits near the top of the list.  Only 11 months since her last visit, the gal notes such words as sleeker, cleaner, tidier and smiles. There are lots of reasons to be happy.  Baltimore headquarters include Black & Decker, Under Armor and US Food Service.  Johns Hopkins is here, and the medical giant’s business headquarters are right next to Four Seasons Hotel Baltimore, on the waterfront.  From the hotel, look down at the inner harbor – seen above, and to the left.  The 256-room hotel, owned by baking giant John Paterakis, is full this weekend, with weddings and staycations. 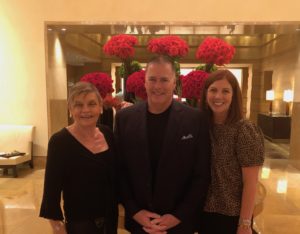 There is a new GM here, Beverly Magee, who has taken to the city with gusto – her own preferred staycation seems to be walking miles, learning about Baltimore past and present as she strides with her husband, serious history buff John Magee.  And, also new since my last visit, the 24-floor building’s rooftop has metamorphosed from waste space to the most divine dinner-only restaurant, The Bygone. Reach it by a dedicated elevator manned by a theatrical local in a grey top hat that almost hides his head, and grey tail coat that nearly sweeps the floor. Emerge up at the restaurant and the theatre continues, turn of the – 19th-20th – century, dark velvets balance the all-glass walls that open to a terrace, with tables for 360-degree views of Baltimore at night. 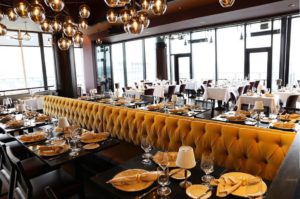 Bygone before the – discerning – flocks arrive

Bygone is such a suitable name. The dress code forbids baseball caps and sneakers but fortunately does not stipulate pulled-in corsets or tail coats, but both genders dress up. The packed 174-seat restaurant has been a top hit since, designed by Baltimore’s favourite, Patrick Sutton, it opened in January. The entire operation is leased to Atlas Restaurant Group, which had actually already been running the hotel’s Azumi Japanese restaurant, and it is rumoured Atlas will take over the ground-floor all-day dining, which closes in January for three months.  Atlas is owned and masterminded by Chesapeake Bayhawks lacrosse star Alex Smith, who at 34 has built up a prolific dining empire, around town and beyond. 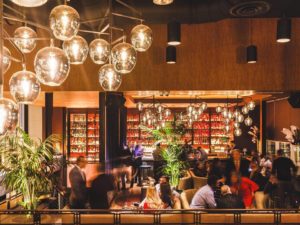 And another view of it

And you do indeed come to dine here for dishes that you, or your parents, remember, such simple things as devilled eggs on a bed of greenery, and a 16-ounce Delmonico steak.  I started with house-cured gravadlax and went on to The Bygone prime rib roast with pommes duchesse and horseradish but somehow the most delicious savoury salmon cheese cake also snuck in.  I drank a local wine, Old Westminster Winery red blend 2014 from a winery owned and run by Jay and Virginia Baker and their children, Drew the vine planter, winemaker Lisa and marketeer Ashli.  Dining atop Four Seasons Hotel Baltimore gives you a warm and family feeling – just like staying in the hotel itself. NOW TOUR THE HOTEL’S END SUITE 1401