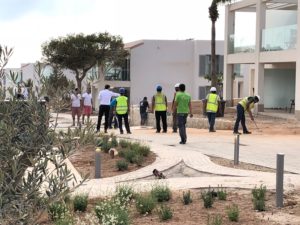 There was a lot of flying involved in the opening of 7pines Resort Ibiza last Saturday, June 2nd, 2018.  Sometime during the amazing, entertainment-filled evening a trapeze-artist performed suspended from a balloon, as shown above. A man with a rotor pack had earlier flown in, landing, amid deafening noise right by the Mayor of Ibiza and the hotel’s two German owners and the German GM, Markus Lück, They were all ready to cut the opening ribbon, and fortunately Mr Rotor Pack was carrying a pair of scissors. Fascinatingly, the gal had arrived only three hours before the party to find the 195-room luxury hotel still in a considerable state of disrepair. 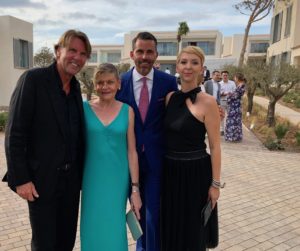 But that just shows what management skills and organisation are all about.  By 7 p.m. that day the garden turf had all been laid and streets and alleyways of what is essentially a village of two-floor houses were all cleaned and tidied. Each house, by the way, holds four suites, two up and two down.  And what impressed me immediately were the staff, hundreds of them including Ariana, an intern from a Bolivian hotel school who went out of her way to make me feel immediately at home.    I put on my party frock, and by 7.10 p.m. the party was already  throbbing to the Balierac Beat.  About 750 people had flown in, about two thirds, it seemed, from Germany, although I later met a top person from the UK-based shopping phenomenon ASOS. Many of the Germans were friends and supporters of the hotel’s GM, Markus Lück, who had been planning the party since last December – and planning the hotel since January 2016. 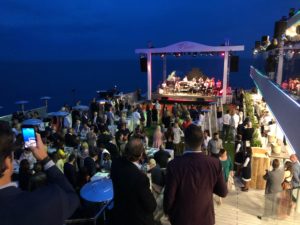 The party in full swing

So how DOES one plan a party for 750?  Hire the best event company around, and discuss everything. Nothing must go wrong.  There was never a shortage of drink that night.  Veuve Clicquot bottles were carried around with gusto, as was pre-meal food – gosh, the one-bite tuna and caviar cones on skewers were unbelievable. Make sure the audio system works. Have human guides to show your guests how to walk, over hour-old grass turf, along to dinner-proper. Then, in the two floor dining area of the  195-room hotel, it was choose-your-own dining partner, although one or two of the Germans, in their national mode for organisation, had pre-arranged tables.  (I had much more fun as I sat variously with Germany’s best luxury travel writer, Reinhard Modritz, and top new-generation US travel advisor, Michael Holtz, owner of Smart Flyer.) 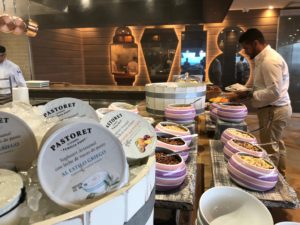 Breakfast, 8 a.m. on the morrow

We watched the sun set, we listened to groups on the fullsize stage, and we wanted pupeteers manipulating  30-foot high inner-lit shapes, and to the trapeze artists.  The entertainment stopped at midnight and, always a plus point for any luxury hotel, particularly a Leading Hotel of the World which had been getting ready for action 24/7 for the previous few days, by eight the following morning the two-floor restaurant complex was, well almost, ready for normal action.  Come on in, said the charming Spanish maitre’d, as the Portuguese head chef and his team finished setting up a breakfast buffet that was second to none, with superb fruits and nuts, and Pastoret yoghurts and French butters (Echire) and English jams (Tiptree).  This hotel is ready to go, and discerning travellers from all over will relish two pools, gorgeous beaches and the vibe of this Balierac island. NOW SEE VIDEOS OF THE PARTY, AND, PARTY-FREE, AROUND ONE OF THE TWO BIG HOTEL-PUBLIC POOLS