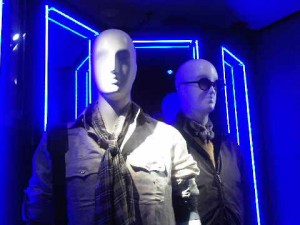 Which hotel has the best shopping in the world?  Retail addicts, shopaholics and fashionistas hold your breath – the answer, says the gal, is undoubtedly The Peninsula Beijing (sorry, The Peninsula Hong Kong, I think your younger sister beats you on this one.

What, of course, does one mean by ‘the best’?  Arguably the boutiques at One&Only Reethi Rah in the Maldives, or the equally stunning shops in Burj Al Arab, Dubai, might achieve greater sales per square foot, but who else has no fewer than 50 designer stores? 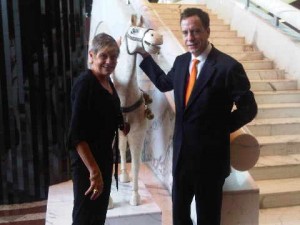 The guy who runs the hotel is the lovely American Don Harrington who has seen so much change in his 12 years here. When he arrived, the hotel, built in 1989, was called The Palace.  He guided it as it evolved to The Peninsula Palace and on to its present name, The Peninsula Beijing.

And he has, as he explained, seen the retail evolve too, dramatically.  From the marbled main ground floor, take 30 white marble steps up to the meetings-conference floor and look down, at Chanel to the left of the main entrance, and Louis Vuitton to the right of the main entrance.

Chanel is already shrouded in white canvas, exquisitely marked with black outlines of a C-logoed-door, cover-up for the fact that the store is extending upwards, to occupy three floors. 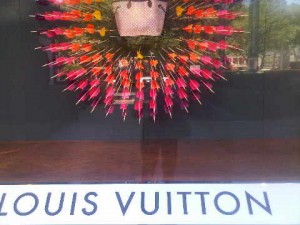 The Louis Vuitton store has windows into the hotel’s lobby, and out to its forecourt (where its fleet of Peninsula Green-Rolls Royce and BMW cars are parked as a synchronised water ballet)

Louis Vuitton will then grow in the same way, up through three floors. Also on the ground floor you have the choice of Bulgari, Cartier, Hermès, Piaget, Louis Vuitton and Harry Winston. From the hotel’s main lobby, take the escalator down one floor to Giorgio Armani, Tom Ford, Ermenegildo Zegna and their fellows. The Armani store has a sign on its door saying ‘one day only’, whatever that means.

I arrived at Beijing Capital Airport with three Armani models.  It did not take much to work out who they were – they were standing by an Armani sign and they were all well over six feet and their waists were about six inches across. Models are a breed apart, like Giacometti sculptures with life breathed into them. 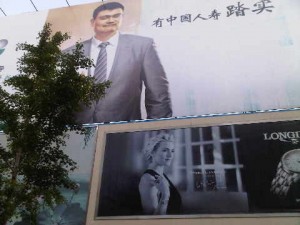 For such lesser shops as Nike and Zara, head out of the hotel, turn left along Donganmen Street and then, after five minutes, left again down Wangfujing street.

Opposite one of the McDonald’s in this pedestrianised street is a giant billboard featuring former Houston Rockets basketball star Yao Ming – and Kate Winslet for Longines, one of Swatch‘s brands. Personalities sell goods in Beijing, as in the rest of the world. 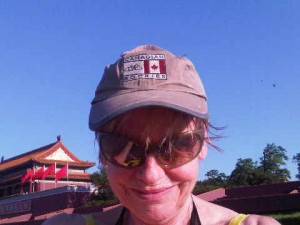 Later in the day you cannot even cycle along Wangfujing but today it was light by five and I headed down to The Peninsula concierge.  Please can I borrow a bicycle – again?  No problem.  Nothing is a problem here.

I spent ten minutes in the gym, using a pilates ball, and decided to forgo a swim and cycle instead. Left along Donganmen Street and left down Wangfujing street and then straight, to the main street where you turn right to Tiananmen Square.

Now cycling in Beijing means being constantly alert.  There are bicycles lanes for all main roads but you can use them in both directions, or cycle in the road or on pavement sidewalks, and who cares if you follow traffic light directions or not?

And if you do collide with a car it seems the driver has to pay you rather than the other way around.  At the north side of Tiananmen Square I took a photo with a background of Tiananmen gate itself which, with its likeness of Chairman Mao, is said to be the exact centre of Beijing. 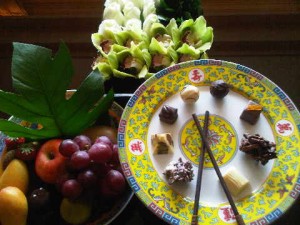 Then it was back to the 525-room luxury hotel.  Wow, one super retail shop per ten and a half bedrooms…  back in my little pad, 760, I ate the fruit bowl, but not the accompanying home made petits fours, and headed for breakfast, and a bit of window shopping.  Too early for real shopping – retail hours in Beijing are ten to ten, easy to remember. 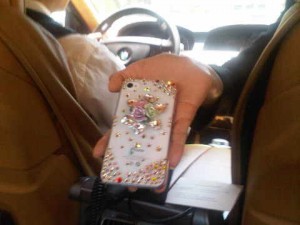 Then it was off again. All packed and ready to go, the wheelie and its owner were whisked out of one of the hotel’s gleaming rotating doors by a miniature bellhop in gleaming white uniform with buttoned hat.

The concierge, Leigh Fi, insisted on coming with me.  Hottest clubs in town, she says, are Migas in Sanlitun Village (near The Opposite House) and, still, Xiu Club in Park Hyatt Beijing.  And hottest accessory for town for young ladies who have arrived is diamante passepartout decoration on the cover of your iPhone.

Travel is nonstop education. Two hours after writing this, I discovered that this very day The Peninsula Hotels announces its own 40-foot Signal 8 racing yacht, named for the tropical cyclone warning signals that the Hong Kong Government has issued since 1884 (also, the number eight is particularly auspicious as ‘ba’, eight, rhymes with ‘fa’, fortune).

Owned by Hong Kong-based investors, the Jason Ker-designed boat will race in England (Cowes) and Ireland (Cork) during the period June through August 2012 and then it will return to Asia, for the China Coast Regatta and China Coast International Regatta, and races around Hong Kong Island and in Phuket.  In between races it will be available for hospitality and hotel team member lifestyle enhancement.