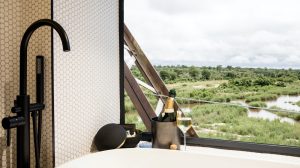 Your suite, in a train, on a bridge…

Imagine staying in a luxury room on a train on the bridge above?  Yes, it will be possible. Kruger Shalati: The Train on the Bridge, in South Africa’s Kruger National Park, will be a global highlight (OK, yes, it is in South Africa where you can already stay in some of Cape Town’s historic grain silos, so imaginatively transformed by architect Thomas Heatherwick, but the gal predicts this train-hotel will get even more of a buzz).

When it opens, virus permitting… when it opens, the static train will have a cantilevered swimming pool, complete with a deck and loungers.  24 glass-walled Carriage Rooms are aboard the re-envisioned train, parked on Skukuza Bridge. They provide infinite views along the waterway: each is a luxury den, adorned with organic furnishings, patterns and textures. On land, the former train station is now the seven-bedroom Bridge House (one is a dedicated Honeymoon Suite). No children under 12 are accepted.

Skukuza Bridge was re-named in 1936 in honour of James Stevenson-Hamilton,  first warden of what would become the Kruger National Park (Skukuza was his Tsonga name): the bridge was previously called, variously, Reserve, Sabi and Sikhukhuza Bridge, and it is 57 kms east of Hazyview, at the confluence of the N’waswitshaka and Sabie Rivers in Mpumalanga – it is 4kms from Skukuza Airport and a five-hour drive from Johannesburg. Skukuza is the administrative headquarters of the Kruger National Park, South Africa.

Train on the Bridge is a project of Thebe Investment Corporation, a Black Empowerment group started by its Chairman, Vusi (Vusumuzi) Phillip Khanyila in 1992: its Thebe Tourism Group division is run by CEO Jerry Mabena. www.krugershalati.com  The gist of this article first appeared in www.latteluxurynews.com