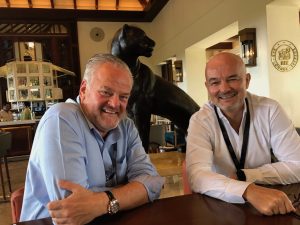 In fact, as well as hosting the opening party for ILTM North America 2019, Fairmont Mayakoba was working flat out for several days.  All 401 rooms and suites were occupied, many by delegates who had deliberately arrived before, and stayed after, the duration of the actual show (who could resist the beauty of the place, its beaches and inland mangrove-lined canals?). There were also, says the gal, the really gorgeous staff, led by GM Robert-Jan Woltering, who was boosted, one could say, by Accor’s Global Head of Luxury Sales Pascal Visintainer. 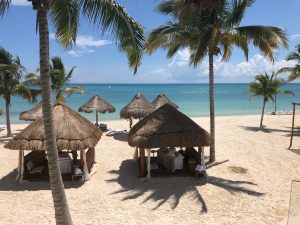 During three days of speed-dating, Woltering’s 800-srong team made sure the 360 exhibiting tables ‘worked’, and that exhibitors and buyers were never short of water or other drinks. A selection of hotel venues, outside the main door, in the lobby, outside and inside the spa and so on, offered a choice of quick lunches. Every night there were cocktails and hosted dinners. In addition to the exhibitors and buyers there were 33 media, mostly from North America, with a flavour from Australia and UK: they had a concurrent programme, overseen by Spotlight Communications’ Lucy Clifton – one lunch, for instance, was sliders and icecream at the Mayakoba complex’s Pueblita village. 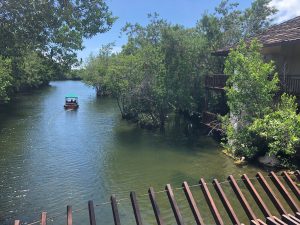 Canal outside my suite

The entire Mayakoba complex, all 1,605 acres of it, is now majority owned by BHL, who also own Four Seasons Mexico City and, in Madrid, Villa Magna.  Here, there are four integral and separate resorts, Andaz, Banyan Tree, Fairmont and Rosewood, which between them have 22 restaurants – stay in one resort and charge anywhere, with a nonstop free shuttle service, which also goes to Pueblita, where an additional craft brewery opens in a few days’ time.  Sadly, I was so busy during my short stay I simply did not have enough time properly to appreciate suite 646, upstairs in a two-floor block. 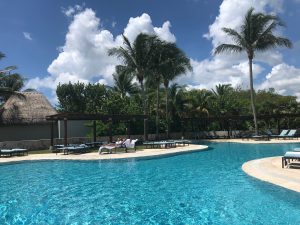 From #646 I looked out, from my balcony, into mangroves and a waterway.  Some ILTM delegates commuted, from one resort to another, by water.  There are villas a mile east, closer to the beach (ILTM Portfolio Director Alison Gilmore prefers to stay in that area so she can hold quiet meetings with her team – she is also right on hand for the beach yoga).  Yes, that was her idea, to have.  ILTM North America outdoor beach yoga, daily at sunrise, plus one sunset happening – and Fairmont laid on healthy green drinks and the suchlike.  I also appreciated working the hotel’s gym treadmills, looking straight into more mangroves, after which it was breakfast time, for a buffet that was truly world-class. I sat out one day, inside the next, eating a lifetime of papaya chunks, drinking that green juice, deliciously unsweetened, to fortify me to the next century, and becoming quite addicted to the wholemeal toasting bread, which tasted as if it has corn in it.  As many have found during its 13 years, this is a truly comfortable, and authentically friendly, luxury hotel. Like my favourite pair of tried-and-tested Pucci sneakers, it feels good. SEE SUITE 646 – AND THEN SHARE BREAKFAST