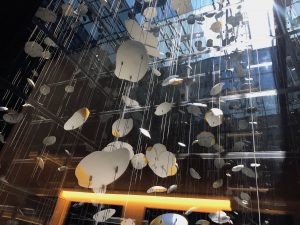 Who remains the greatest Montreal-er in living memory? Leonard Cohen springs to mind. There is a 21-floor high mural of him, on Crescent Street – see the photo above. Artist Gene Pendon, working with a team of 15, created the 10,000 sq ft likeness from a photo taken by the singer’s daughter, Lorca Cohen.   As luck would have it, Cohen can be clearly seen from the city’s newest luxury lifestyle centre, originally conceived as a Thompson but it marvellously evolved into Four Seasons Hotel Montreal, and it opened 8th May 2019. The gal called in for a few hours before leaving town. It is an intriguing concept, with a direct 3rd floor opening to the Weston family’s Holt Renfrew (think Hong Kong’s Marco Polo direct to Lane Crawford, but they are both owned by Wharf) and, from the fourth floor up, an open atrium hosts futuristic sculpture – think The Peninsula Tokyo, but there the atrium ceiling is closed, here it is open to the sky. 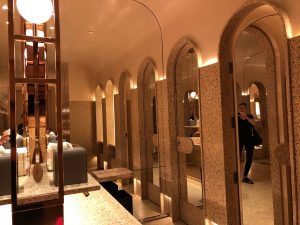 No, not a hammam but the ladies’ washroom

There was once a Hotel de la Montaigne on this rue de la Montaigne site but then along came local entrepreneur and retailer, Andrew Lutfy of Groupe Dynamite. He is already billed as keynote speaker at the C2 Montréal thinktank, 27-29 May 2020: by that time he will be able to share a year’s experience of his 163-room hotel, which opened 8th May this year. It might be Lutfy’s first hotel but he knew, and knows, what today’s lifestyle followers want (I have not yet met Mr L but I gather that for him the word ‘lifestyle’ is even more important than the word ‘luxury’). He got Gilles & Boissier to do most of the interiors, which include ladies washrooms that are more like a hammam. He wanted bedrooms with clear glass walls allowing see-throughs to freestanding corium bathtubs – see the video below – and he OKed finest-crystal bathroom glasses, Riedel naturally. 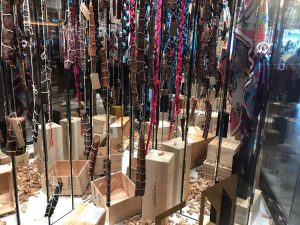 There is an eight-room spa with airy off-white colouring and somewhat narrow corridors that could pose challenges for sumos and, indeed, many of today’s normal people by the time they have wrapped white towel robes around their torsos (by contrast, the large all-white sauna makes you want to sing. The 24/7 airy fitness centre has a new range of Precor pieces that almost made me yodel as I followed its alpine walkway, complete with on-screen cowbells. It is the third floor, however, that is showcase, and cash machine, for the hotel. Four Seasons appointed a first-time GM, who had been number two in the Macau hotel, but they cleverly hired a highly creative and locally-experienced Director of Sales and Marketing, Alex Tessier, who had, at a previous boutique hotel in Montreal’s Old City, won a global marketing award where finalists included Accor, at corporate level.  Here, he was determined to have the restaurant full from the first night – what do you think first-timers thought of the restaurant entrance, going in past a glass-walled fish drying cabinet that is also incongruously hung with designer scarves? 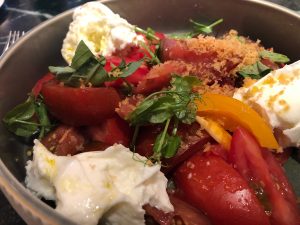 And, sure enough, Marcus, the restaurant, has indeed, despite being upstairs on the third floor, been full from day one. Part of its success is its layout, with indoor seating and, year-round, a covered terrace. Marcus Samuelsson, he of Red Roosters and others, is a big draw to those who know him and his easy-to-eat food: his menu here is traditional French brasserie, with raw bar and fish of the day and a few infiltrations, say sashimi and quite honestly one of the best capreses in a long time. From Marcus you can sashay around the Social Square, the third floor of this luxury hotel, taking in the low barrelled ceiling of the night club, and the speakeasy-type booth for two, ideal for paparazzi-phobes who want links to a mixologist and no-one else. And from the third floor Leonard Cohen is so close you feel you can touch him. WANT TO SEE ROOM 1005?