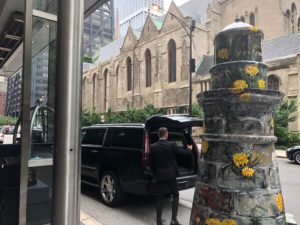 Tower outside the hotel…

Four Seasons Hotel Chicago has a decorated tower outside, on its East Delaware Place sidewalk. The gal remembers when painted cows first appeared, in Zurich, and now cows, and bears and even towers, have migrated to the world’s greatest cities.  It is a clever idea.  Sassy luxury hotels and others sponsor such works for the benefit of a charity, and the people of that city.  Four Seasons’ tower, part of 51 unique towers in the 2018 Lighthouses on The Mag Mile project, was decorated by a Disability and Human Development DHD research specialist, Kaitlin Stober. This is all the more appropriate as this year’s charity is The Chicago Lighthouse, working for access and inclusion for people with disabilities. 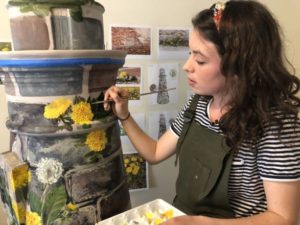 Kaitlin Stober painted the surface of her tower with patches of dandelions growing against a multi-coloured brick façade. “My work, and the accompanying audio/written commentary, provokes consideration of disability inclusion and disability rights through metaphor. Dandelions, despite similarities to some commercially valued flowers, are widely regarded as weeds. They are often uprooted and discarded, left to grow through the cracks or on the margins of our manicured society. This is comparable to the historical segregation, institutionalization, and marginalization of persons with disabilities, many of whom are still excluded from considerations of mainstream society”, she says. 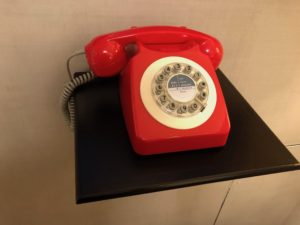 The 343-room Four Seasons Hotel Chicago, owned by JMB Urban Investment, has been involved with art since it opened in 1988.  Today there is a brilliant painting down at ground floor level – see it, above.  Called Bene come il sale(as good as the salt), it was painted 1989 by Frank Stella.  There are also amusing artworks.  The ladies’ washroom, for instance, has a real circular dial phone, red, on a stand. This is in effect an emergency ‘concierge’. Above the phone is a label that says ‘if only Lydia had known about the “need it now” phone she could have saved her tears.  By picking up the red phone, she could have asked for any last minute personal items she needed’. 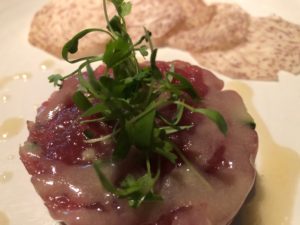 I was back at the hotel for a quick lunch at Allium, and while enjoying a really tasty tuna tartare we discussed art – the Art Institute of Chicago has a John Singer Sargent exhibition – and culture generally.  Hamilton is on at CIBC Theater all this month, and, to celebrate the centenary of Leonard Bernstein, born 25 August 1918 in Lawrence MA, the Chicago Symphony plays two special concerts, on 18th and 19th August. Four Seasons Hotel Chicago is right in the thick of worthwhile offerings in this gorgeous Windy City, and no wonder it attracts a culture and luxury seeking clientele.