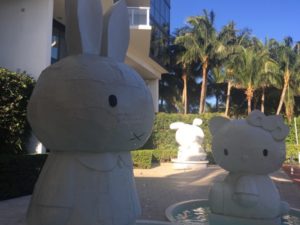 Six-foot animals outside the door

Any arrival usually starts at the door, but when there is something significant outside, before you physically reach a building, the impact can be even greater. The 20-floor Costas Kondylis structure that houses the 408-room W South Beach Hotel & Residences is significant as architecture, but the clutter that includes blue pedal bikes, omnipresent taxis, invariably black people-carriers and leisure travellers with the most enormous suitcases (plural) even though they might wear thong-swimmers and lace cover ups nearly all the time, this is now joined by a trio of all white sculpture animals, as above. Go inside this luxury hotel, and you hardly know where to look first. Is this – shown above –  truly a Warhol, asks the gal? 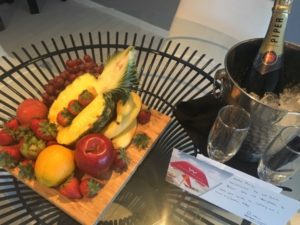 A welcome, just right for the recipient

Yes it is. The property’s owners include Aby Rosen of RFR Realty, who has over 100 Warhols in a collection that is said to number more than 800 priceless pieces, all post-war, and heavy also in such names as Alexander Calder, Damien Hirst and Jeff Koons (as well as his share of this hotel he also owns W Tel Aviv Hotel). He obviously loves this Miami Beach property, and throws an annual dinner party during Art Basel with guest lists that range from Ron Burkle to Eric Schmidt via Leonardo DiCaprio and inevitable Kardashians. This hotel buzzes nonstop, with people checking in and out, throughout any 24 hours. The previous incumbent of my original room had obviously not wanted to leave and eventually a charming Hungarian, on vacation from a Masters in International Management as he thought it would complement his Swiss hotel school degree, gave me a substitute room, 328. A welcome arrived commendably quickly. 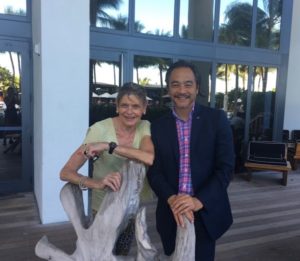 Rick Ueno, the GM here for the last three years, admits that after 30 years with Westin he has now grown his hair, let his chin whiskers grow freely, and taken off his socks (and he has to be somewhat more lenient when any of his 750-strong team sports tattoos and/or body-piercing). We are luxury rebels, or luxrebs, he says, coining a word for his colleagues that I shall use myself, in future. Those staying here are luxrebs too: I saw an ample young lady going up to one of the three front desks wearing a thong swimsuit and an insufficiently short lace top and no-one blinked, while a little darling, all of 30 months, sauntered by in an orange net tutu skirt and dayglo-green sunspecs and every adult female cooed. You can be whatever, here, and that included someone who was staying merely eight hours, total, feeling thoroughly at home, quickly. 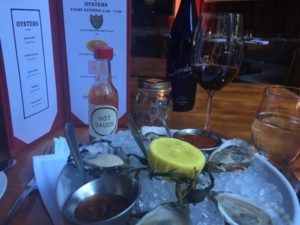 Champagne and oysters on the terrace, sunset

The two highlights of my lightning stay at this luxury hotel were definitely the people, both guests and more importantly, the staff who have to deal with this incessant buzz – and my dinner. Dutch Café Miami, often shortened to Dutch, is three-meals, either inside by the working kitchen or outside, under leafy trellises and bordered by Rousseau-type undergrowth. Dine before 7.30p.m. to take advantage of the Champagne and oyster special. I had one of each of the five oysters, $1.75 each and set, in alphabetical order, in an ice bucket, with hot sauce and also vinegar dressing: I worked my way through Blue Island, Great Sark Bay, NY; Goose Point, Willapa Bay, WA; Puffer Petites, Wellfleet MA (my favourite, and unusually creamy); Rocky Nook, Duxbury Bay MA, and Shibumi, Puget Sound WS. I did not even begin a circuit of the Champagnes on offer, which include a flute of Dom Pérignon 2004 for $30, but then I could also have gone for a trio-tasting of Macallan 25-year single malts. As I said, there is always something going on here. Now see my video below.