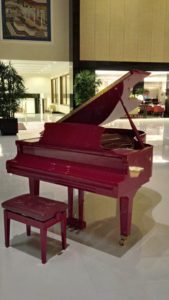 Ready for the music – at The Oberoi, Mumbai

Luxury is holistic and the Sybaritic Single is a music connoisseur. He remembers hotels that appreciate the importance of sound. While the rooms must be absolutely soundproof, lobbies, lounges and other public areas should pay closer attention to the correct audio background.

Most W hotels are known for their nightclub vibes in the corridors all day long, which is not precisely what the Sybaritic Single’s ears appreciate first thing in the morning. At the same time, the Island Shangri-La Hong Kong is one great example of a well-thought soundtrack that varies according to the time of the day as well as remains so well-zoned. Always set at the correct volume – gentle enough not to distract an important business conversation but, at the same time, loud enough to protect the privacy of a romantic talk – it follows the theme of every particular venue within the establishment.
Live music in the lobby is always wonderful, be it piano, harp or even an orchestrated quartet. However, it becomes even more important for a great GM to agree a correct repertoire when it comes to live performers. The Sybaritic Single is a frequent guest at one hotel in Dubai that employs a charming lady who plays piano every afternoon. Despite her immaculate performing technique, the repertoire is close to appalling: it features ten songs at most, including the now almost vulgar “My Heart Will Go On” and a very sad version of Beethoven’s “Für Elise” – and this timeless afternoon tea repertoire remains the same through the years.
Despite popular belief, luxury hotel gymnasiums are best when close to silent. Most guests will use personal earphones with their own soundtracks, and if they suddenly have to take an important call during the workout – that would save them from explaining that they are not in a disco.
Finally, every luxury hotel limousine should arrive equipped with a decent playlist as well as wireless connectivity to the Sybaritic Single’s own mobile phone to stream music instantly. What will the Sybaritic Single choose to play? Let it remain a secret.