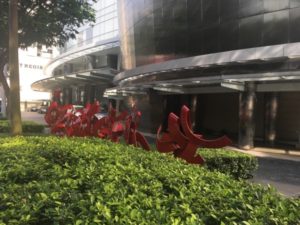 How much do cars outside a building say? A couple of years ago Harrods, in London, saw a jaundice of bright yellow or orange designer cars, from SUVs to racing supercars, parked outside. The ensuing publicity in the UK media was such that all the relevant car manufacturers must have cringed. Well, asks the gal, the Qataris own Harrods so why shouldn’t their princelings park outside? The problem is that today nobody seems to appreciate princelings, be they Brandon Trump through to the heirs to, say, Hong Kong’s great fortunes. You never see the heirs to the Cheng dynasty, of Rosewood fame, showing off their wealth. At true luxury level no-one flaunts wealth. I headed round to St Regis Singapore, owned by another ultra-discreet family, the Kweks. Led by Kwek Leng Beng, this is the family that owns so many hotels (in New York, its Millennium Broadway last week unveiled the re-ropening of the hotel’s own Broadway theatre). But, like Chinese anywhere, especially throughout south-east Asia, the Kwek family aim to come out ahead, which is one of the reasons they like their hotels. In Singapore, for instance, the Kwek portfolio has added the newly-branded J.W. Marriott South Beach Singapore. 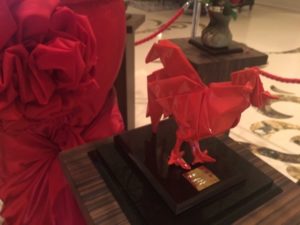 Origami under the New Year tree

Right behind the Kwek-owed St Regis, Singapore will probably have an Edition hotel, same owners.   So what? It is a great spot and in times past every gold merchant, for instance, would want to be near other gold merchants. Think today of London’s Bond Street or Mount Street stores, or, in Paris, rue Saint Honoré, where signature brands are side by side. So it is, often, with hotels. In Bangkok, the Heinecke-owned St Regis Bangkok will soon have the Waldorf Astoria Bangkok as its neighbour. Here, having another hotel, also part of Marriott, surely only increases the appeal of the destination. Meanwhile, St Regis Singapore makes the most of the present. Parked outside today were the customary designer cars, including a McLaren (see above). 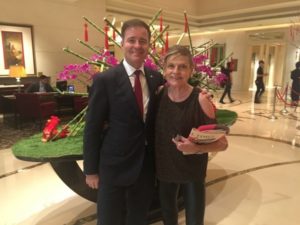 I go in, past a 20-inch long glass miniature of the Frank Gehry fish shape that dominates, in full glory, the rear of Hotel Arts, Barcelona. Here in Singapore right now, there is a Chinese New Year tree in the lobby. But it has more. Klaus Christandl, GM of this luxury hotel, has introduced a display of 28 stunning origami statues, all crafted by one of Singapore’s top origami masters, Leong Cheng Chit, a former engineer. Buy one of these treasures and you benefit the local charity chosen by Mr Leong, the Halogen Foundation Singapore.