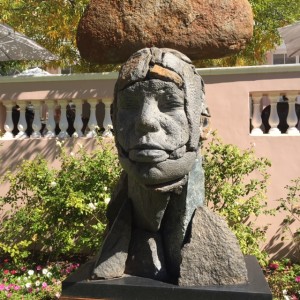 The gal has something in common with that great hotel visionary James Sherwood, who bought such beauties as The Copacabana Palace, Reid’s Palace, Lapa Palace – he loved buying palaces – and the Mount Nelson. Now he is no longer the driving force at what is today a group called Belmond, but he still loves ‘the Nellie‘ so much that he returns several times a year, for long periods each time. Anyone involved with ILTM Africa, however, probably only gets to this gorgeous luxury hotel annually. The 2016 show finishes today, Wednesday April 6th, but then it runs on into WTM Africa, also at Cape Town‘s massive convention centre. This year the Nellie had 48 rooms taken up by ILTM – it is used to such events, as 130 rooms will be taken by Virtuoso when that excellent organisation holds its annual overseas meeting here in Cape Town April 18-21, 2016. 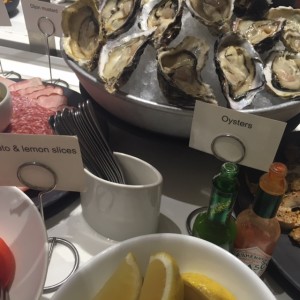 Oysters on the breakfast buffet

As always, the gardens at Mount Nelson are gloriously embellished with modern sculptures loaned by the Everard Read Gallery – this year’s artists include Angus Taylor, whose blue silhouette I love at Ellerman House, also in Cape Town. This year, it seemed, a lot of money has been spent on refurbishing the Mount Nelson, and on training. Every one of the 350 employees (the number goes down in winter) seems to say hello, and to greet you with such warmth. I swear the breakfast buffet is even more copious, and its oysters are better than ever. Breakfast chef Leonie gave a little wave as I panned over her in the breakfast video, below. One day I had a tasting lunch with Xavier Lablaude, GM of this lovely hotel: the starter was by Kirstin Hellemann, the main course by Dion Vengatass – both these are in South Africa’s national team in the 2016 International Culinary Olympics – and we finished with mango-mango by pastry chef de partie Albert Keswa (see above). 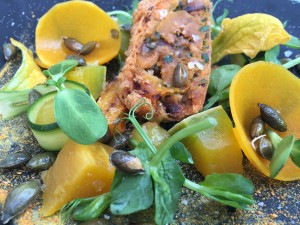 Afternoon tea was already taking place. It is so popular that there are now three sessions, including an evening tea which comes with sparkling bubbly: at all sessions, the lemon citron cake seems to be a great favourite, as are macaroons. Everything, in fact, is brighter here now. Christoff, the jewellery boutique, has painted some of its vitrines bright colours, which makes you want to buy, and the hotel-run general boutique has really covetable items. Of course there was no chance to shop during ILTM, everyone was too busy. The 79 exhibitors met up with 79 hosted buyers, namely travel advisors who came from, it seemed, everywhere. I met up with a Latvian who had been a DJ, progressed to being a Member of the European Parliament (MEP) where he was on the travel and tourism committee. 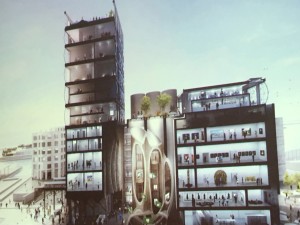 Artist’s impression of the Silo Hotel

And that led, post-politics, to his running his travel advisory in Riga. Interestingly, he invites is ten best clients to a communal dinner to talk travel, which leads him to research where to offer next. Hence Africa, and next, he says, Japan. ILTM Africa is of course heavy in safari lodges, but it also features such luxury hotels as Meikles in Harare, and even the massive complex that is Fairmont Zimbali, north of Durban. It also gives sneak-peeks at what is coming up: I am making a note, now, about The Royal Collection‘s Silo Hotel, a Thomas Heatherwick transformation of South Africa’s main grain silos, here in Cape Town. It should open March 2017, just in time for ILTM Africa (April 21-23, 2017), when, yippee, I will be back home again at the lovely Mount Nelson, ideally in the Oasis Wing, so handy for going to the excellent 24/7 Technogym, and for nipping down 40 stairs straight to that breakfast, oysters and all.