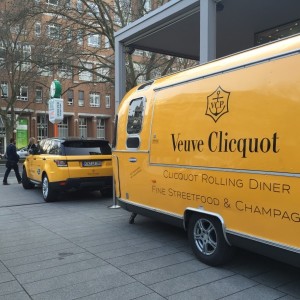 InterContinental Berlin, above, is, honestly, a very special hotel. Just as New York fashion legend Iris Apfel re-invents herself continually (at 94, she last month headed to Paris for a week of couture shows and celebrity events in her honour) so this 1958-vintage luxury hotel is still magnificently up to date, and there is always something new. Last week, for instance, the 510-room hotel parked a Veuve Clicquot champagne truck right outside its entrance. Was it a coincidence that its colour went rather well with a lifesize deer statue about 20 feet away, and a matching lifesize bear, for Berlin, inside the enormous lobby? That lobby needs to be big, because of all the people who swarm inside. 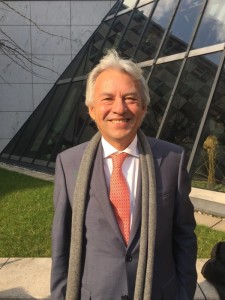 The hotel opened as Hilton, switched to InterCon in 1978, and apart from a few months in 2011 when it flirted with Dorint it has been InterCon ever since. It has had legendary GMs. Willy Weiland moved on first to hospitals and now he runs Solutions DOT WG. Next in the line-up of outstanding GMs came Robert Herr, who after some years was tempted away to look after the gorgeous Phoenicia InterContinental, Beirut. The hotel‘s enthusiastic boss now is Aernout De Jong, a Dutchman who seems to be on duty 24/7, at least at times of maximum pressure – and that was certainly last week. He had 2,040 top hotel industry leaders and investors conferring for two and a half days – they had come from everywhere (Brazil Hotel Group CEO Alex Solleiro, on right, had flown in  from Rio de Janeiro). 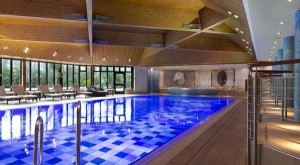 Few had time to use the pool

De Jong’s team worked to military precision. During the conference they had to turn the main ballroom into a fine dining venue, in two hours – see the video below. When the conference ended, at 3 p.m. on the Wednesday, the entire exhibition area, and all the conference reception furniture, had to be taken down, and shipped in enormous trucks that were parked end to end in Budapeststrasse outside. By 7 p.m. the lobby lounge area had been turned into Marlene, a nightclub that would run that night, and Friday and Saturday, right through to the small hours of tomorrow. Sponsored by Express Travel International, Red Sea Hotels and La Dolce Vita, Sharm el Sheikh, #ThisIsEgypt featured nightly stars – Wednesday’s was American Remixer Roger Sanchez. 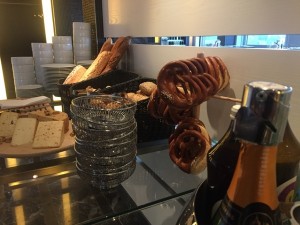 Even the meetings areas were quickly ‘recycled’ – a big Merck conference started Thursday at 9 a.m. Thank goodness, for those who have time, there is plenty of opportunity to relax and recover. The big indoor pool, with suitably-large communal hot tub, opens at six and the adjacent glass-walled Technogym is 24/7 (the gym, pool, sauna and spa share a separate elevator, round the corner from the main elevators, which many discover saves a lot of time if you are all heading down to a meeting more or less at the same time). The knowledgeable, by the way, definitely opt to stay in a seventh or ideally eighth floor room, for access to the Club Lounge. This is not the largest lounge on the circuit but it is one of the best. Why? At peak times senior management are working up there, at the Club Lounge desk, where there are always two on duty. At all times it is thoughtful, with great food and drink. The buffet runs from breakfast with hot dishes, and à la carte extras quickly brought, through to all-day cold snacks – love the guacamole – and evening canapés, with sparkling wine even at breakfast. It is also marvellously appointed, with half-wall-height windows stretching from end to end, so light and bright, if the weather allows. I also like having such a choice of seating, from high-up communal tables, to lower-height communal tables down to ordinary-height tables, or sofa-seating by the big television. There is also a library, ideal for German speakers. Really, a well thought-out club lounge does add so much to a luxury hotel.