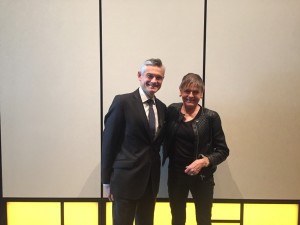 If you go to the top of a tower today you are in for a big surprise… the tower in question is Toranomon Hills, the late head of Mori Hospitality‘s vision of Tokyo’s vertical city. He built a 52-floor tower: retail at the base, then offices, then residences and, on top, from the 47th floor up, a super-duper luxury hotel. Arnaud de Saint-Exupéry is GM of what is now the 20-month old Andaz Tokyo Toranomon Hills, and he welcomed the gal back to what is the buzz of the artistic, entertainment and fashionista crowd of Tokyo, Japan and further afield. There is always something going on here, he says, sharing details of Andaz Salon events. 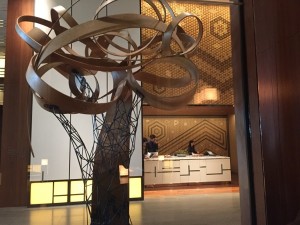 Swirls above a lobby chair

A cellist might play, art might be shown, and so on and so forth. Tony Chi’s interiors make an amazing auditorium. Above, big picture, is looking up at the ceiling of Andaz Tavern, the all-day restaurant that has a big L-shaped kitchen, and the tasty ‘real food’ that is a feature of all Hyatt-family hotels. Overhead, the ceiling’s swirls, by the way, are wood, put together by an English sculptor – or do I call him wood artist? – Charlie Whinney. He has also done this 15-foot chair, visible with the main concierge desk behind. Behind me as I took this particular image is a massive communal table, where hotel guests love to sit, work their devices and generally hang out. 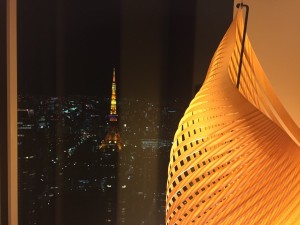 Because of their height, in this the tallest building in Tokyo, rooms have spectacular views. One-roomer 5028 has full-wall windows, looking far down to Tokyo Tower, illuminated all night long. The standing sculpture to the left is a single piece of finest wood, knife-cut and stapled in shape (imagine sneezing while trying to do this). We had dined on the top, 52nd, floor, next to the highly popular Wedding Chapel. First, mixologist Warren Lindsay from South Africa fixed his creation, Tokyo Mule, infused vodka and ginger beer. Next we moved to the golden aura of the eight-seat SUSHI, where Misato Masuda, another meticulous artist, produced omakase, chef’s choice. See the video below. 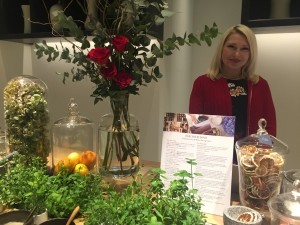 Rachel McCrory in the Blend Bar

Of course I had to visit this luxury hotel‘s spa, which is currently unveiling lovely new products, Biologique Récherché, which I already knew, and an English label, Elemental Herbology, and, it seems, a first anywhere, Kotashina, using green tea from Kyoto. The spa boss, Rachel McCrory, from Colorado, had been involved in Andaz’ first Blend Bar, at Andaz Maui, and she has a Blend Bar here, too – such a nice welcome to a spa, and the subsequent treatment far exceeded expectations, particularly since the curtains were left open so I awoke to this splendid view.