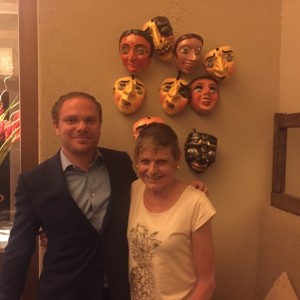 This is a story of a unique luxury hotel beloved of Monocle readers, and Mario Testino and Pharrell Williams, who brought his top support crew here enroute to Machu Picchu two weeks ago. Captains of industry come to Belmond Palacio Nazarenas Cusco again and again, not to return to Machu Picchu, but to stay put, enjoy walking in fascinating Cusco, and then relaxing in and around the city’s only outdoor pool, heated year round. There are so many touch points here, says the gal, it is hard to know where to start. Look above at the Do Not Disturb and Please Make Up signs, both charming fabric figures made by a local family – like everything in the hotel, including its Shaker-type furniture, they are, discreetly, for sale. 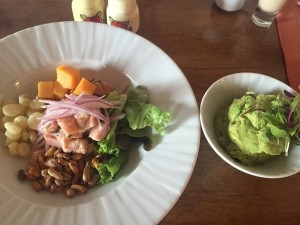 Whereas its neighbour, Belmond Monasterio Cusco, all of 30 feet away, was a monastery, Belmond Palacio Nazarenas, which opened as a 55-room hotel in 2012, was a convent, but more. First, a history lesson. The palace was home of a conquistador, and it later passed to Doña Maria Calderón, who for some reason was drowned here, in 1546, on the orders of Francisco de Carvajal, Demon of the Andes (he had her corpse hung from what is now the corner balcony of room 200). By 1644 it passed to the Jesuits, who ran it as a boys’ school. After the devastating 1650 Cusco earthquake it was sold on and on, finally to the church, who in 1757 invited in 45 beatas – like nuns but without having taken vows. They were of the Order of Barefoot Nazarenes, and the last of them did not move out until 1977. In 1998 the church leased the building to what is now Belmond – read more history in the hotel’s own fascinating booklets, by local historian Peter Frost. 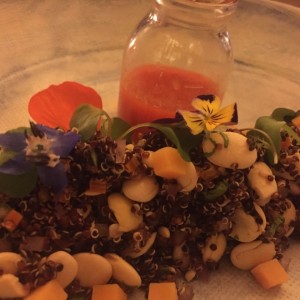 Floris Boyen is a Belgian entrepreneur who has been running this amazing place for the last three years. Among the things he will miss about Peru are its potatoes (thousands of different types) and its leaves. He introduced me to uchucuta, a green Andean paste pounded daily on big stones – I later checked the recipe from Peruvian celebrity chef Gaston Acuria, and it is finely chopped seeded green and red capsicum oil, lime, fresh cheese and black Peruvian mint, huacatay. Floris Boyen taught me only to order ceviche at lunch as it has to be fresh from the fish that came in that very morning: whereas elsewhere ceviche might be served, sauced like a prawn cocktail, in a martini glass, here you get solid titbits of fish, surrounded by its additives. I also enjoyed a really stunning ‘ceviche’, de quinua y tarwi, that turned out to be a salad of quinoa, beans and lupin. 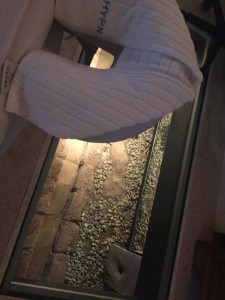 Look down through a spa bed to ancient ruins

And then I went on to alpaca, like a loin of baby lamb, with sun-dried potato, and a side salad with avocado. Peruvian gourmet heaven! And then I went up to bed, in room 200, today called the Nazarenas Suite. I did not even think of that 1546 incident but, rather, of the Mother Superior of the Order of Barefoot Nazarenes, Abbess Agustina de San Ignacio. This had been her room and I think she must have been a nosy old soul as from that balcony, and out of the window overlooking Plaza Nazarenas, you can sense all the city gossip. But unlike her, I have beautiful Aliso wood, grey silk and softest terry robes, exquisite ironed sheets with simple silver embroidery on a bed that has a metal outline four-post over, and a soap butler, a wood box with guillotine to cut off my choice of home-made soaps. I went down to Hynoze, the spa, and discovered that lying face down, for a back massage, I looked down through a glass floor panel to illuminated Inca ruins, below. This is indeed an aesthetic luxury hotel.